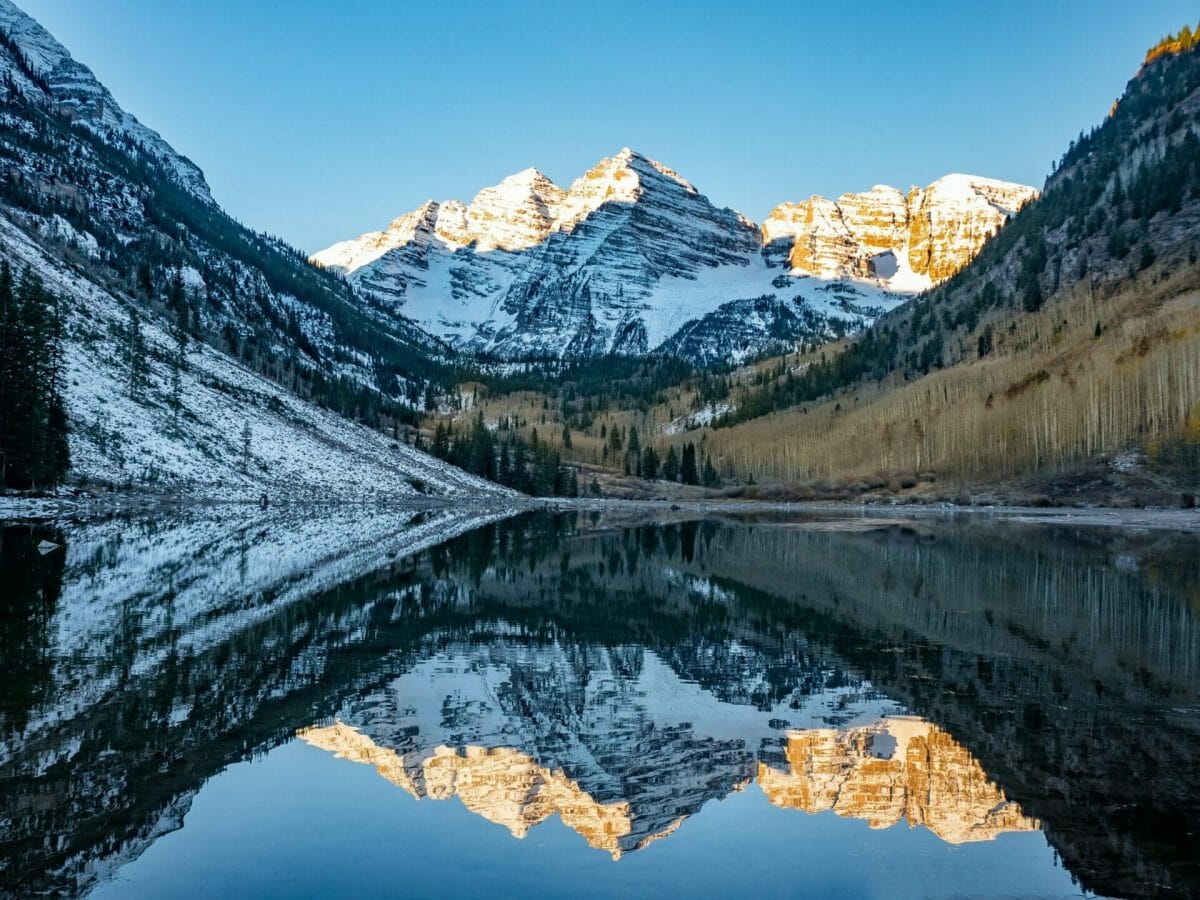 Now that the snow has really started to fall in Colorado, we spent the week trying to occupy ourselves indoors. Of course that entailed visiting a few breweries from Silverthorne to Glenwood Springs, but more importantly, it also included long afternoons spent in hot springs and even a relaxing evening soaking in the local vapour caves.

By the weekend, the weather finally broke enough for a visit to one of the state’s most scenic wilderness areas, so we really feel like we got a bit of everything (even if it’s not exactly what we’d planned).

Cruising out of Rocky Mountain National Park after one last attempt at the scenic drive (which was still closed due to snow, although we didn’t learn that until we drove half-way up the mountain), our first stop this week was in Silverthorne, CO.

Under ordinary circumstances (i.e. visibility), the view would have been absolutely incredible, both on the drive and just sitting in town, but as it was, we could hardly make out the base of the giant peaks that surrounded us.

It was yet another weather-related disappointment for our Colorado stint, but such is the nature of travel— and even with the luxury of time (we don’t really have anywhere concrete to be until the beginning of January when we need to be on the ferry to Mazatlán), we decided that we’re better off heading south than waiting around for an eventual break in the snow. Instead, I’d rather just come back to Colorado when my toe is healed and I can actually hike and climb.

With that in mind, we scooted our way down to central Colorado and spent the middle half of our week holed up in Glenwood Springs, a rather charming town whose main appeal was the abundance of hot springs. There’s hardly a better way to spend a snowy day than neck-deep in 108F water!

Usually we’d head straight for the free, primitive hot springs scattered throughout the forest, but again, the snow influenced us to stay closer to town (on plowed roads) and we opted instead for an easier option.

First, we checked out Iron Mountain Hot Springs and soaked for several hours in a number of their 16 pools situated right on the river, watching in amazement as bald eagles flew spitting distance from our heads and even as they dove to collect an unsuspecting fish from the water. It was like being in a NatGeo documentary while also floating in a hot mineral bath, and I’ll challenge you to name something more wonderful than that.

Second, and the true highlight of Glenwood Springs as far as Dan and I are concerned, we checked out the Yampah Vapour Caves for another relaxing afternoon. Instead of floating in hot mineral water, we descended into underground caves that are heated to 112F at 100% humidity by natural springs.

The experience was somewhat like a steam room, drenching you in sweat and heating your muscles to mush, but also distinctly different, in that I’ve never been into a steam cave before. Crystals sparkled on the walls, narrow passageways connected to larger or smaller caves, and while you lay on a stone bench relaxing, the sound of bubbling water and hissing steam was unmistakable (and surprisingly ambient).

I didn’t take my camera into the caves for obvious reasons, but there’s a photo from the internet above, just to show what it was like!

To wrap up the week with a bang, we spent a sunny day walking around Aspen and then drove out to Maroon Bells Wilderness dark and early for sunrise the following morning.

The view was absolutely jaw-dropping, and I can see why reservations to visit the area (an effort by the Forest Service to keep crowds down) are booked months in advance. Apparently Maroon Bells are the most photographed mountains in the country, and while I question whether it’s really possible to measure that, I don’t doubt that it could be true just based on the scenery.

We bought a permit from someone online and, as instructed, arrived before 8am when the road closes to private vehicles. It was 20F outside, so cold it was almost painful, but we suspected it would be worth the suffering. And it was.

We spent at least an hour by Maroon Lake, watching as the sun slowly ignited the very tips of the peaks above us and finally as the snowy slopes were completely illuminated, and then poured our freezing bodies back into bed to try and warm up under the layers and layers of blankets.

Once the day warmed up a bit further (and after a 2hr nap), Dan and I returned to Maroon Lake and then continued up another trail to Crater Lake (4mi; 500ft gain). Although I’d promised to stop hiking and allow my toe to rest, we couldn’t miss the opportunity to see the Maroon Bells from another angle— what I hadn’t bargained for was how icy and downright dangerous the trail was.

And therein lies the major issue with being in Colorado right now: we can manage the cold (sort of) because there’s always sun around the corner, but when it drops below freezing every single night and hardly cracks 40F in the day, conditions become really unsafe for high-elevation hiking and climbing.

The downhill portion of the hike, as always, involved a lot of toe-related suffering, but shortly after returning to the van we were gifted the ultimate distraction— Dan spotted a fox just outside our window and we all but flung ourselves outside in excitement.

The fox was hardly fazed by our presence, trotting through the scrub before crossing the carpark and actually getting onto the trail near Maroon Lake, weaving through people and alarming more than a few families (some of whom actually grabbed their children, like this tiny fox was going to try and drag them into the woods).

We followed him (at a respectful distance) the whole way to a rocky perch in the tundra, pictured below. Seconds after this photo, a passing dog charged full-speed at the fox and chased him off into the forest, but for a few sweet moments, we watched him pose in front of the mountains almost as if he’d planned it.

Slowly but surely, we made our way from the freezing Rocky Mountain National Park to the brink of the Colorado high desert just beyond Paonia.