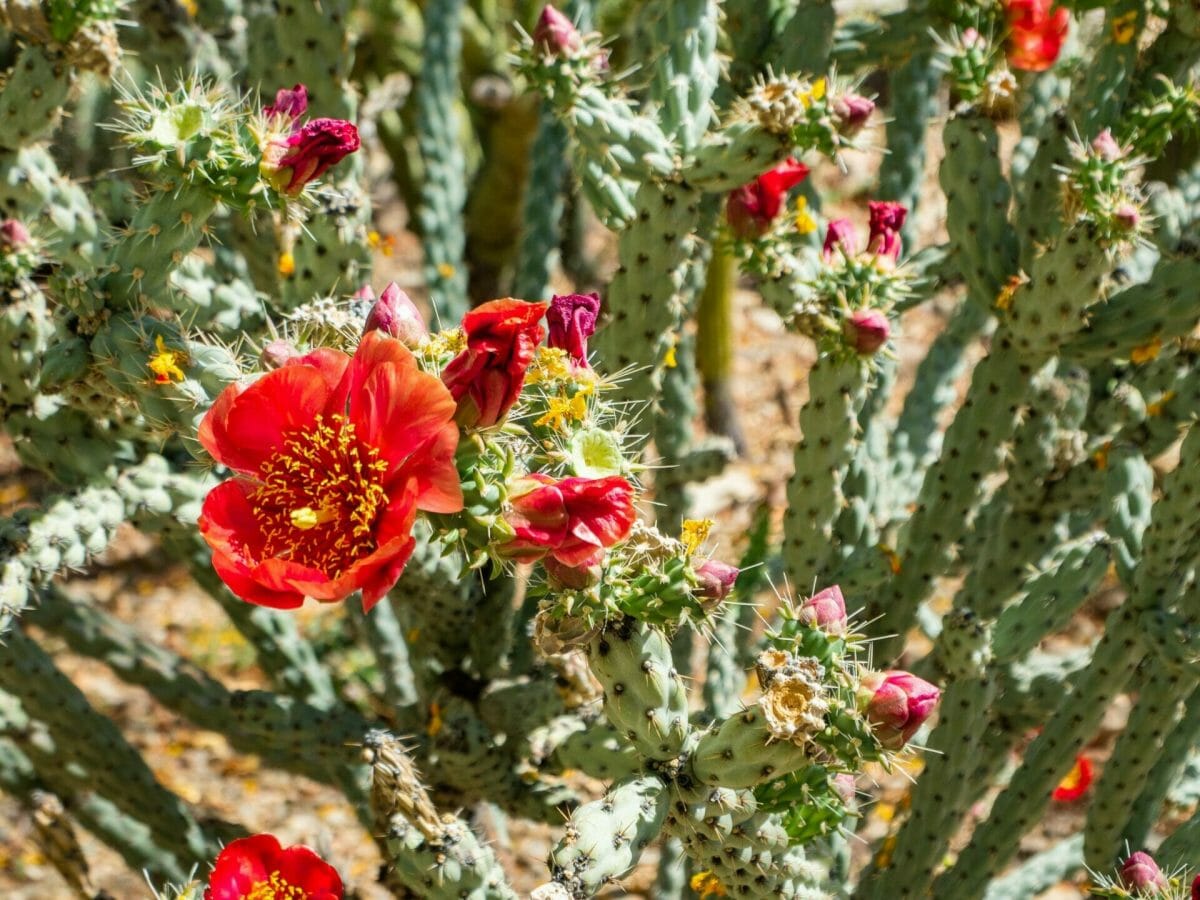 Between deep cleaning the van, catching up on some work, visiting family, and adjusting to the blistering heat in southern Arizona, we still managed to get out on the trail most days this week and even explore a new national park. And for all the complaining about the weather, neither of us would trade the experience of seeing the Sonoran Desert fully erupted in spring bloom, not even for a pleasant 70F afternoon!

After spending a couple days getting organised in northern Arizona, which included several delicious meals out and a 420 movie marathon in the hotel, we set out to explore Kingman on the surprisingly lovely Monolith Garden Trail (7mi / 11.3 km).

For a town that was just a convenient stopover en route to the White Tank Mountains and a trail that was originally just an excuse to get outside, we were both incredibly impressed by the fascinating geology and abundant cacti, many of which were in full bloom.

A happy coincidence of passing through Arizona in April is getting to enjoy all the flowering cactus— it’s been a dry year, so it’s not as dramatic as usual, but for those who’ve never seen ANY flowers on a cactus before (like us), it’s absolutely incredible.

In fact, I spent a majority of the week just photographing various flowers, trying to collect an image of every type of cactus in bloom, and I feel like I quite nearly succeeded.

From the petite Strawberry Hedgehog Cactus with beautiful pink flowers to the Buckhorn Cholla who blooms in all variety of yellows and oranges and reds to the iconic white waxy flowers atop the Saguaro, we saw an insane spectrum of colour this week, which only improved as we headed south.

Once in the White Tank Mountains just west of Phoenix, we made it outside on the Ford Canyon loop (9.7mi / 15.6km), which was even more spectacular than yesterday’s adventure in Kingman.

With the trail almost entirely to ourselves and cactus-covered mountains in every direction, we almost forgot about the heat— and when hummingbirds descended on the flowering red ocotillo, we completely did.

Continuing south, we spent the next day hiking the Pyramid Trail (6mi / 9.7km) in Phoenix’s South Mountain Preserve, dripping in sweat as we crested over the ridgeline to views of the entire valley below us.

Gatorade left behind in the freezer proved an excellent motivator, and we made it down with plenty of time to get on the road towards Saguaro National Park.

I had originally intended to visit Saguaro (pronounced saw-WAH-row) during my road trip last year, but meeting Dan (and spending a considerable amount of time together in Joshua Tree) delayed southerly progress to the point that I ended up cutting it out of my itinerary entirely.

It was with great excitement, then, that we found ourselves in one of the country’s most underrated parks this week— and all previous feelings of disappointment at having missed Saguaro quickly evaporated as we realised just how magical this place is in April!

Although the 100F weather was a massive hindrance in getting outside and completing some of the longer hikes I’d been eyeballing, we still managed to explore 4 excellent trails in Saguaro West, as well as drive the scenic loop through some of the park’s most iconic landscapes.

Our previous weeks spent in the desert also did nothing to prepare us for the incredible sprawl of cactus gardens that make up Saguaro West, spiny green arms reaching towards the sun in every direction, ringed by dozens of other equally beautiful species of plant and succulent, all in the shadow of Tucson’s surprisingly impressive mountains.

When the heat eventually proved too much, we spent Sunday exploring the Arizona-Sonora Desert Museum just beyond the boundary line of the national park.

I’m often dubious to spend money on museums and zoos with the natural world so close, but I was incredibly impressed by the Desert Museum, which showcases a variety of flora and fauna native to the Sonoran Desert, as well as geology and natural history of the region.

It ended up being an excellent hot-weather activity, offering intermittent shade while outdoors and much-needed air-con on some of the indoor exhibits.

We explored outdoor desert trails that wound through natural enclosures of javelinas and coyotes, identified even more cacti in the botanical gardens, gawked at the incredible mineral collection, and learned a lot more about what makes this desert so incredible.

All said and done, it was worth the money, even if it did mean sacrificing a day of hiking in the national park (which we both agree we wouldn’t have survived) and a pretty wonderful way to wrap up another week in the desert.

After a two-night stay at a hotel in Kingman so that we could deep clean the van, do a massive load of washing, and catch up on some work, we spent the remainder of the week doing what we do best— lounging around beautiful campsites in secluded corners of free BLM land.

Even though we definitely enjoyed more meals out than usual, we still succeeded at another relatively inexpensive week at just $24.50 per person/day, owing mainly to our lower than average fuel consumption. It pays to travel slow!