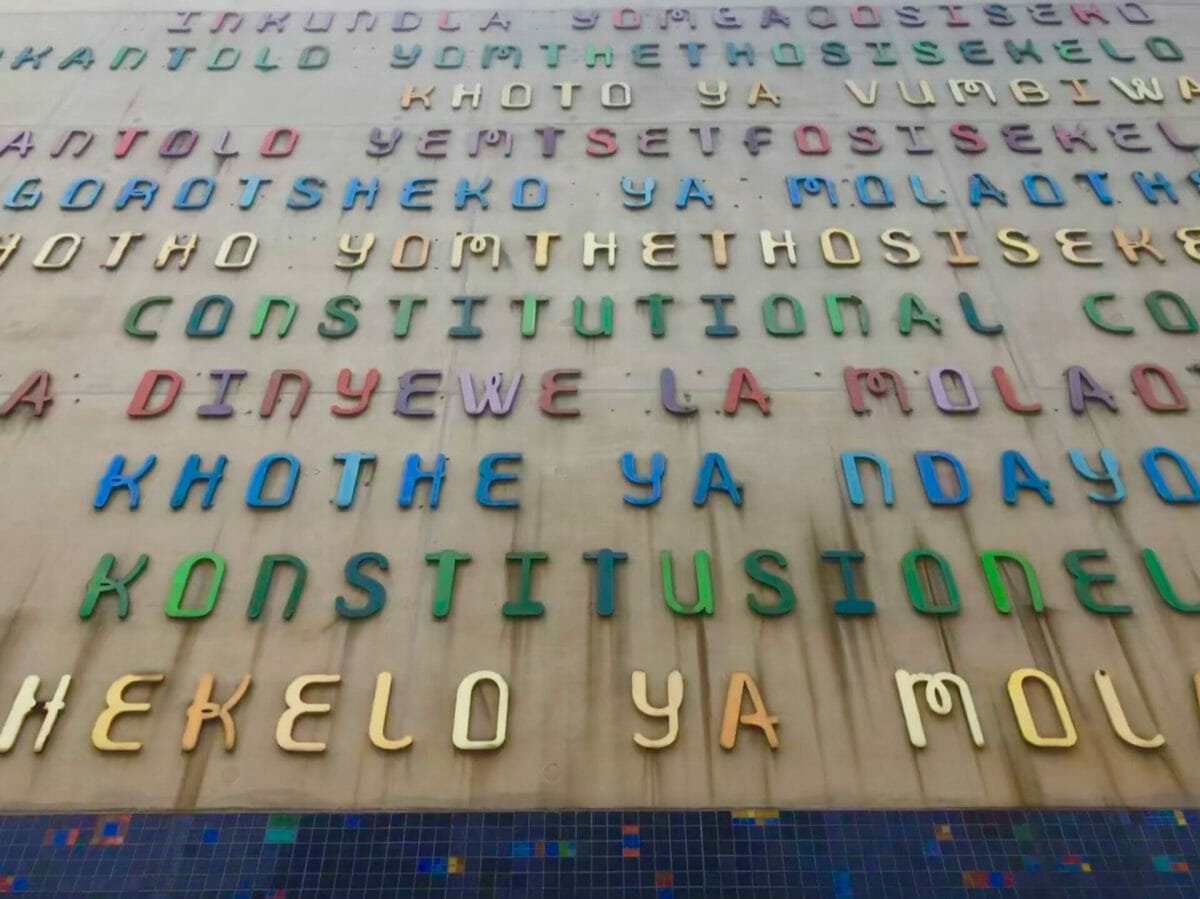 Just yesterday, South Africa celebrated the 21 year anniversary of the signing of its constitution, the Flame of Democracy still burning brightly outside of the country’s Constitutional Court in Johannesburg. The Court, South Africa’s highest authority, allows anyone and everyone to come sit in on sessions, just one example of the transparency of this new government. Unfortunately, the Court isn’t in session during our visit, but we are still able to explore the foyer and courtroom itself, both filled with beautiful art and designed with great significance.

All the details: Constitutional Court

Where to stay: When in Joburg, stay in one of the hip neighbourhoods like Melville. There are a number of reasonable Airbnbs in the area and your hosts can be a great source of local knowledge!

Top tips: Try to visit Constitutional Hill during off-peak hours— we managed to get a tour guide all to ourselves for the same price.

Before we are even inside the courtroom, we see examples of this. A giant section of the building’s facade is covered in colourful text— “Constitutional Court” in all of South Africa’s 11 official languages— and nearer to the roof “dignity, equality, and freedom” are hand-scrawled by the original justices into the cement. One of the justices appears to have the penmanship of an 8 year old boy, but we learn that he is blind and only has the use of one arm, making his contribution to the wall and his presence in the court all the more inspirational. Even the doors into the courtroom have significance— the 27 fundamental human rights have been carved into the door in one of the official languages, as well as represented in sign language, and the handle into the court is inscribed with Braille. Without even stepping foot inside, it’s apparent that this is intended to be a place for all people, free of discrimination, certainly in sharp contrast to South Africa only 24 years ago under apartheid.

Once inside, we take in the foyer which is similarly covered in meaningful artwork, the most immediately apparent several tree statues that reach the ceiling, meant to represent traditional African “government” where conflict resolution took place under the trees. The other notable piece of art is a ladder, hanging beneath the words “luta continua” (the struggle continues, in Portuguese), whose 7 different rungs each represent a piece of that struggle. We also admire photos of the past and present justices— there are currently 4 females among the 11 judges— and learn about the meaning of the court’s logo, in which people of all colours gather beneath a large African tree, the top of which is shaped like a fire to represent the Flame of Democracy. The same shape, the tree and the flame, is on the South African flag.

Finally, we enter the courtroom and my immediate impression is that it is colourful and somewhat random, but, as with everything in the Court, there is meaning and symbolism behind all of the design choices. The bench for the justices, for instance, is covered in cow hide, the black portion of which is meant to symbolise equality and the unique white portion of which is meant to symbolise individuality. The judges’ bench is also lower than the seating provided to the public, which is unusual for a court, but is meant to show that the judges are there to serve the public, not to elevate themselves. Most interestingly, a thin glass window runs along one side of the courtroom looking out into the foyer through which you can only see the legs of a person walking past, not their gender or their race, meant to signify that the law is blind and is intended to protect all people in South Africa. What began as just something to do in Johannesburg ended up being incredibly inspirational and I can’t recommend a visit to the Constitutional Court highly enough.

A guide to overlanding in Southern Africa, Part III: What to pack