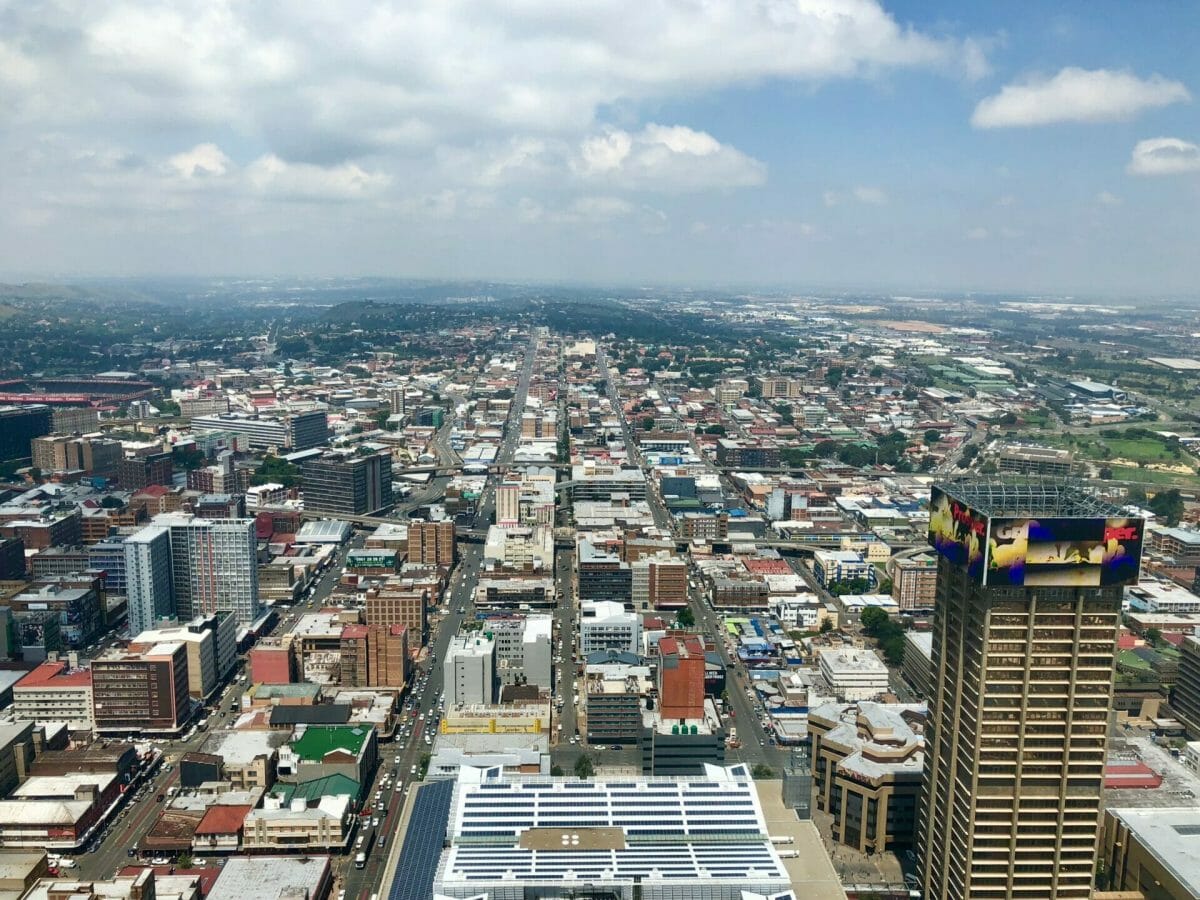 Top 5 things to do in Johannesburg

Touching down in Johannesburg after a truly torturous (but certainly not unprecedented) 35 hours of flights and layovers, it dawns on me that we don’t have any real plans for our two days in South Africa’s largest city. Really, Joburg is just acting as a springboard to our safari in Kruger National Park and Sabi Sands Game Reserve, so not a lot of thought has been given to exactly how we will occupy our time here.

There’s also the fact that Johannesburg is reportedly quite dangerous, so we are initially wary of venturing into sketchy areas and reluctant to explore with quite the same fervour that we might elsewhere. As it turns out, there are plenty of perfectly safe neighbourhoods to wander through and our lovely Airbnb hosts are full of recommendations for must-see sites, the result being a surprisingly wonderful time in a city we didn’t expect to enjoy in the first place. Here are some of the best activities for your time in Johannesburg.

We stayed in a charming little Airbnb in Melville, positioned only a few blocks back from the main drag (7th St), and thoroughly enjoyed exploring the area. Besides the little boutiques (including the funky 27 Boxes made entirely out of shipping containers), there are a number of trendy bars and tasty restaurants to enjoy, all within a few blocks. We can certainly recommend the big breakfasts at Café de la Crème, the nachos and margaritas at La Santa Muerte, and the bunny chow (Durban-style Indian curry in a bread bowl) at Satkar.

Take in the view from the Carlton Centre

For only R15, visit the tallest building in Africa for sweeping views over the buzzy and sprawling Joburg. Getting to the building is truly half the fun, as well— it’s in the centre of the city and surrounded by colourful shops overflowing with people. It’s a slightly sketchier part of Joburg according to the locals, but it was fine in the middle of the day if you take an Uber right to the building and don’t flash any cameras or phones while you’re on the street.

This vibrant and hip precinct is not far from the city centre and is absolutely overflowing with art galleries, museums, trendy boutiques, highly-recommended restaurants, and colourful street art. We meandered through the shops, explored cute little markets, and just generally enjoyed the vibe for an afternoon in Maboneng. The Ethiopian restaurant James XVI was highly recommended and I’m slightly devastated not to have tried it, but it was rather early for dinner (and I had just filled up on some honey plum sorbet from Sobae). Another recommended spot is Living Room, a rooftop café/bar overlooking the city.

For R65 (~ $6), take an hour long guided tour of Number Four and learn about the horrifying conditions in which prisoners, including Mahatma Gandhi and Robert Sobukwe, were kept (Nelson Mandela was imprisoned in the nearby white jail, the thinking being that it would be more difficult for him to escape if he stood out among the other prisoners). We were fortunate enough to enjoy our guide completely to ourselves, and although it is possible to visit the prison solo, I would recommend taking the very inexpensive tour and benefiting from the knowledge and stories of a guide. The nearby Women’s Gaol has been extensively remodelled, but houses plaques with information about the prison and exhibitions on women’s health topics, which you can explore yourself after the tour.

Read more about our visit to Number Four in this blog post.

See democracy in action at the Constitutional Court

Visit South Africa’s highest court and witness truly transparent government by sitting in on any session without appointment. This was recommended to us by our Airbnb host, and despite not being that excited about it initially, we went and ended up thoroughly enjoying the experience. With our guide from Number Four prison, we walked through the foyer and into the court room, learning about the incredible symbolism that guided every single design feature and piece of art. The result is a truly unique building with layers and layers of meaning that is well worth a visit and definitely one of the highlights of my time in Joburg.

Read more about our visit to SA’s Constitutional Court in this blog post.

Other things to do

With more time (and less jet lag), this list could easily be two or three times as long— despite what anyone might say, there are actually plenty of interesting things to do in Joburg! Probably the most popular activity not included on this list is a tour of Soweto (South Western Township), where Nelson Mandela and many other historically significant figures grew up.

In the end, we opted not to visit, as I felt a little weird about partaking in what is basically slum tourism: visiting a poor area that is still home to over one million South Africans (a majority of whom are black) and that remains somewhat unchanged from the segregation that led to its creation in the first place. That being said, I know many people really enjoy the tour and learning more about Apartheid, so certainly make that decision for yourself. I’m confident that no matter what you do in this bustling metropolis, you will walk away with your expectations far exceeded.

Most visitors will arrive into OR Tambo International Airport, where you can take a taxi or an Uber onwards to your accommodation. Before you leave the airport, pick up a SIM card from Vodafone!

Don’t even think about trying to take public transport around Johannesburg. For safety reasons, you should either be in a registered taxi or, better yet, an Uber. In the city centre, you should minimise walking around unless you know exactly where you’re going (it’s not safe to have your phone in your hands, even if you’re just looking at Google Maps for a few seconds).

Outside the centre of the city, there are some neighbourhoods where it’s safer to walk around if you feel like getting out. Maboneng and Melville, both on the list above, are great, culture-rich suburbs where you can explore art galleries, enjoy cafes, and photograph street art in relative peace.

Where to stay in Johannesburg

I’d recommend staying in one of the trendier neighbourhoods away from the city centre, such as Melville. We were able to comfortably walk to cafes for breakfast or restaurants for dinner without feeling unsafe, which was really nice (and in contrast to our time in the centre of the city). Still, you’ll notice every house has a 10ft+ barbed wire fence surrounding the property and pretty advanced security systems to prevent the theft that does occasionally happen even in nicer areas. Airbnb is a great way to get local advice on what to do in Johannesburg and stay in safer, residential suburbs.

Read more about South Africa in these posts

A very sweaty hike to Akchour Waterfall and God’s Bridge