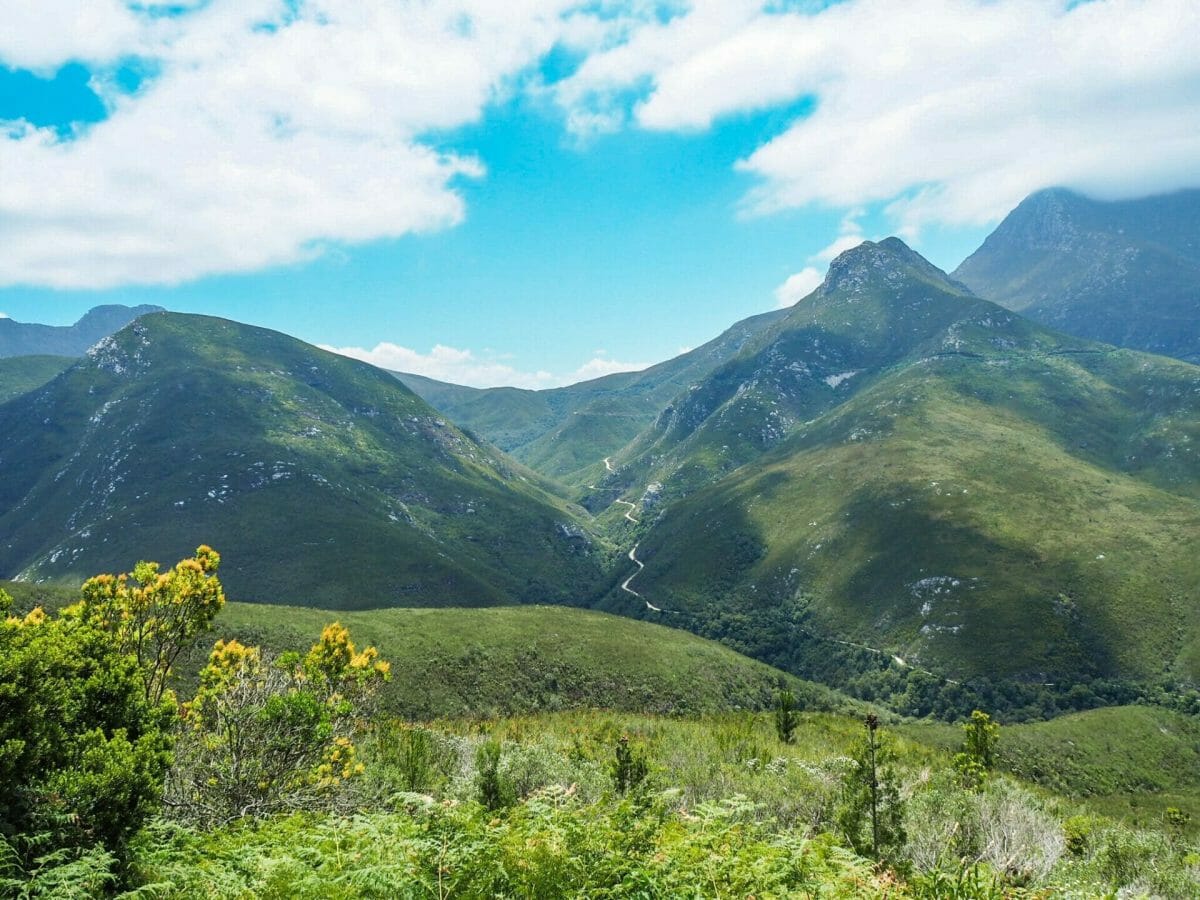 Rolling out of our lodge in George around mid-morning, it’s just a short 45 minute drive to Oudtshoorn (pronounced something like oats-warren) today, our next destination along the Garden Route. Despite the reasonable proximity, however, Oudtshoorn may as well be hours away— the landscape changes dramatically to rocky hills and red dirt, and the weather also increases by what feels like 20 degrees.

Our drive over the Montagu Pass is shockingly narrow and winding, but we do arrive in one piece and with a number of gorgeous photos, so it was well-worth the stressful drive (easy for me to say as the passenger, but I think mum also really enjoyed it).

After checking into our cute little B&B, we drive about 15 minutes north to reach Karusa Winery, where we spend the majority of our afternoon tasting wines and nibbling at delicious food, taking in the stunning scenery of the vineyard and the looming mountains (more like hills, really). Karusa is set in the Klein Karoo region, a semi-desert area in southern South Africa that receives bulk sun and produces, as a result, some really top notch red wines. Mum is extremely disappointed that she can’t ship an entire case home and has to settle for just bringing a single bottle back, but we both agree that it has been an afternoon well spent.

After spending several hours just sipping wine and chatting, we’ve run out of time to visit the nearby Cango Caves, something I really wanted to do, but still have time to pop over to the ostrich farm next door for a tour, which promises to be quite interesting. Oudtshoorn is actually world famous for its ostrich farms and ranches, so I am more than a little curious to see what all the buzz is about.

Once at Cango Ostrich Farm, the guide explains the migration of ostriches from the Sahara desert down to southern Africa, which certainly accounts for their settlement in a town like Oudtshoorn that is very borderline desert. He also shows us a number of feathers and the leather hide of an ostrich, the second strongest animal leather (beaten only by kangaroo, interestingly enough), and then shows us a case containing the actual stomach contents of several ostrich, including a lipstick case, a lady’s shoe heel, sticks, rocks, and a plastic pipe. Clearly ostrich are not the brightest of animals, but, in their defence, the stones are actually used within their first stomach to grind food down for better digestion in their second, as ostrich do not have teeth. Still, a shoe heel? Why.

Next, we see an incubation room where the huge ostrich eggs are kept during the 42 day period. If you take the eggs from an ostrich nest, the mum will immediately forget that she’s laid anything and will just continue laying eggs, up to 120 per breading season, so it’s obvious why ostrich farms incubate the eggs rather than leaving them with the mother. Dozens of times a day, the mother ostrich would normally rotate the eggs to prevent the chick from falling to one side of the shell, the veins on that side shortening, and then those vessels ripping when the egg eventually shifts, so the farmers also take on that task as well.

We shift outside to meet a few of the ostriches, most notably Betsy who is tricked into hugging us by the clever placement of a food bucket. Her neck is alarming muscular and I would not want to be on the receiving end of those pecks, but she is still cute in her own little ostrich way.  We meet another several dozen ostriches (from a distance), see some emu from Australia (who are smaller, not as fast, live shorter lives, and are a lot meaner looking than the ostriches), and finish with the customary gimmick of standing on an ostrich egg. The eggs are actually 2mm thick and can withstand 160kg, so it would be quite challenging to break one, although our guide tells us that they are quite sensitive to shock so I’m careful to step gingerly on and off, trying to avoid covering myself in rotten egg.

After the amusing ostrich tour, we head back to our guesthouse and relax poolside with a couple glasses of wine and pizza leftovers from lunch, reminiscing over another amazing day on the Garden Route and looking forward to many more adventures to come.

Read more about our road-trip along the Garden Route:

Out on the town in Windhoek, Namibia