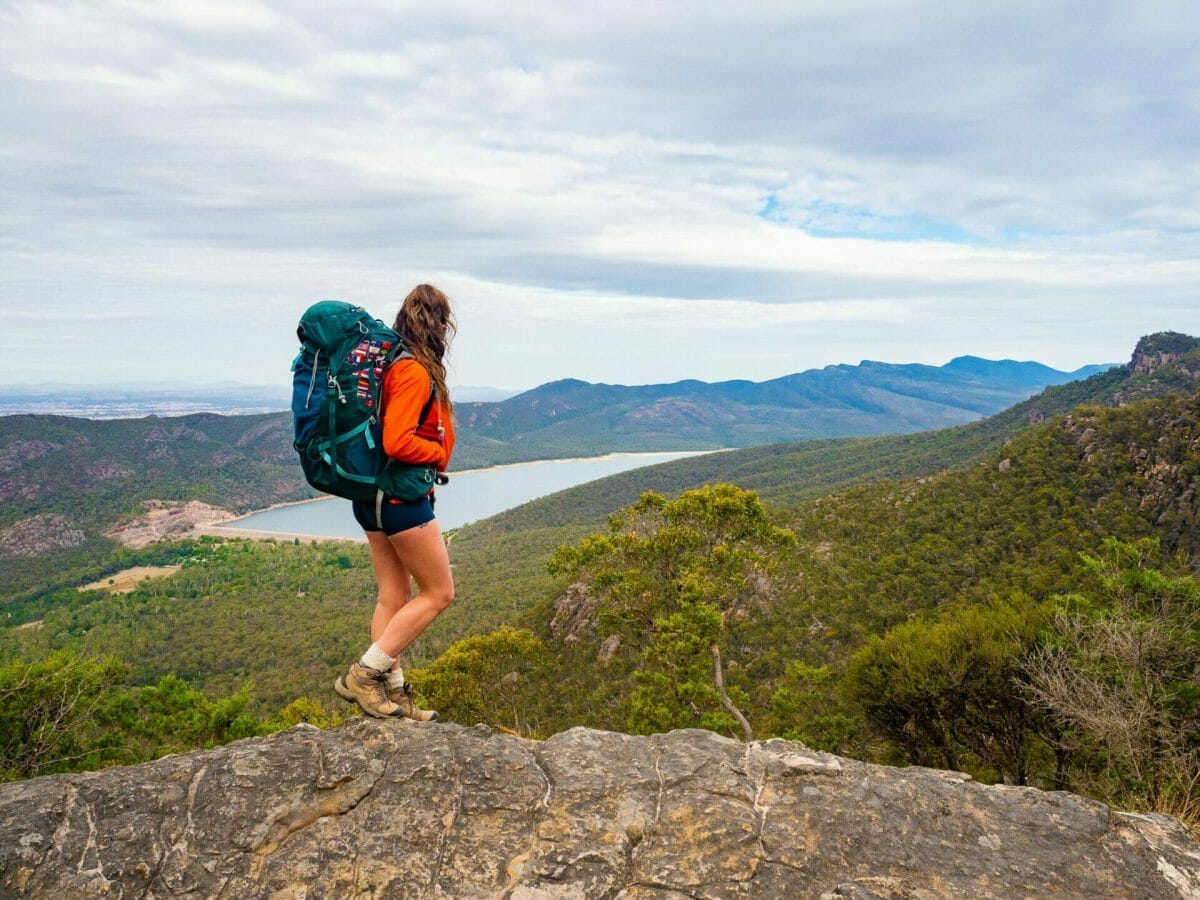 About 250km NW of Melbourne, the Grampians Peaks Trail is set to be the state’s newest “iconic walk”, a 13-day journey along the peaks and through the forests of one of Victoria’s most spectacular (and often overlooked) national parks. I absolutely can’t wait for the project to be completed so I can hit the trail on what will be the longest hike I’ve ever done in Australia— but in the meantime, VicParks has opened a 3-day section of the walk and I’m dying to get a sneak peak.

Two weekends ago (on what ended up being my last weekend outside before we effectively locked down thanks to COVID-19), I ticked off this beautiful 37km loop from Halls Gap with my friend Nicole, who flew down from Newcastle for a few days of outdoor fun. We had a phenomenal time and now I’m even more excited for the full trail to open.

Highlights: trekking through amazing rock features in the Grand Canyon en route to the Pinnacle; sweeping views over the Grampians and Lake Bellfield from the top of the Wonderland Range; charming campsite built specifically for the GPT

Read more: EVERYTHING YOU NEED TO KNOW ABOUT HIKING THE 3-DAY GRAMPIANS PEAKS TRAIL

Lake Bellfield from the top of the Wonderland Range

Having packed both my backpack and a backpack for Nicole last night (I get a deep satisfaction out of being the official outdoor gear supplier for all of my friends— validation that I really do need all four of these sleeping bags), I roll out of my city apartment quickly and efficiently when she pulls up out front at 9am.

We are both a little surprised and very relieved that her flight from Newcastle went ahead this morning without any delays. Everyone is expecting interstate travel in Australia to shut down at any second, but for now, she’s here, we’re fully packed (after stopping off in Ararat to pick up 2 bottles of wine), and on the road towards sunnier weather in the Grampians.

The 3hr drive from my house in Southbank up to Halls Gap, the main tourist town and trailhead for the Grampians Peaks Trail, passes quickly as we swap stories and catch up. Nicole and I actually met in Zambia a few years ago, and both Callum and I have kept in contact with her, especially when we were living only 2 hours away during our Sydney days. We are a bit farther now, but still only a quick flight!

Nicole at the trailhead

Climbing towards the Pinnacle

It’s just after 1pm when we finally set off from the trailhead, but the day has cleared to be absolutely beautiful, even a bit hot, which is a pleasant surprise for late March. We only have 9km to camp, so the afternoon start still gives us more than enough time to enjoy the scenery, and there is plenty to enjoy!

I’ve only been to the Grampians once before, but it was enough to make me fall completely in love with the dramatic rock features, textured sandstone mountain ranges, and expansive valley views that are truly unlike anything else in the state.

Our main objective today is getting up and over The Pinnacle, the most popular lookout in the National Park and one that I know from experience is worth all of the sweat that is quickly accumulating along our backs (and occasionally dripping into my eye). It’s going to be good, and I keep reminding us of that.

Climbing through Silent Street up to the Pinnacle

More than half of the Grampians Peaks Trail is on rock

The ascent to The Pinnacle, despite the heat, is really every bit as spectacular as the view itself, though. We stomp up large steps carved into the stone, scale enormous sheets of rock, and squeeze through narrow cracks and crevices in the Grand Canyon, all while admiring the somewhat otherworldly landscape of layered sandstone and stacked rock, some of which look almost like enormous sedimentary broccoli florets.

A few waterfalls along the way are entirely dry, I suppose because it’s only early autumn and we haven’t had much rain yet. Still, the rock scenery is enough to hold our attention all the way to the top of the Pinnacle, where a fenced lookout offers insane views over the prow-like rocks that jut from the Wonderland Range and over the checkered valley and turquoise Lake Bellfield below. It’s actually even better than I remembered.

Overlooking Lake Bellfield from the Pinnacle

After taking a few photos (which is really all we can manage with Nicole’s fear of heights, both to being near any edge herself and to seeing me near any edge), we find a shady spot under a tree to enjoy a delicious lunch of tuna and crackers.

Save for a nearby group of African travellers who loudly announce that if this were Africa, everyone would be dancing and then play music loudly from their phones to test their theory, we marvel at the peace and beauty of the Grampians.

COVID-19 pandemonium has not yet affected the mountains, and looking out from the top of our little rock perch over Fyans Valley, you could almost forget we’re in the middle of a global health crisis. I certainly try.

Nicole at our scenic lunch spot

Me and Nicole on the Grampians Peaks Trail

After spending nearly an hour at the Pinnacle, we are definitely ready to leave the dozen or so day-hikers behind and continue onwards along the Grampians Peaks Trail. We’ve gotten some interesting looks with our big packs today, most of the visitors to the park likely unaware that a multi-day walk even exists (a few people who ask where we’re going actually seem very impressed), but anyone we see now is likely doing the Grampians Peaks Trail, too. It bodes well that we see hardly anyone until we arrive into camp a couple hours later. Finally, that peace we were after.

This second section of the walk leaves some of the more impressive rock formations behind, but we get constant views of the valley and lake from the ridgeline, a worthwhile trade off. We end up stopping to sit and chat on a particularly well positioned rock not long after leaving the Pinnacle, but then it’s straight onwards to camp, a mostly flat or even slightly downhill journey.

Sunset on the Grampians Peaks Trail

I’m actually surprised when we do eventually spot the tent platforms at Bugiga Hiker Camp, and even though it’s only taken us 4hrs to get here, it’s with some relief that we drop our packs to the ground, kick off our boots, and set up our tent for the night. Nicole is pretty disheartened to learn that there are no camp showers in the bush, but the wine is a satisfactory consolation.

Over a delicious and sophisticated 3-course meal of Cup of Soup, dehydrated Tandoori Chicken, and mini Cadbury easter eggs, we watch the sky burn hot pink as the sun descends behind the cliffs. All the heat is instantly zapped from the day and we both fall asleep wearing all of our jackets, even though I’m in my -20C sleeping bag. It’s probably the first time I’ve ever been warm at night while using this bag (the chilly Grampians can’t compare to subzero glacial winds on the Huayhuash Circuit), and I sleep like a happy rock.

80 amazing things to do in Sydney, Australia