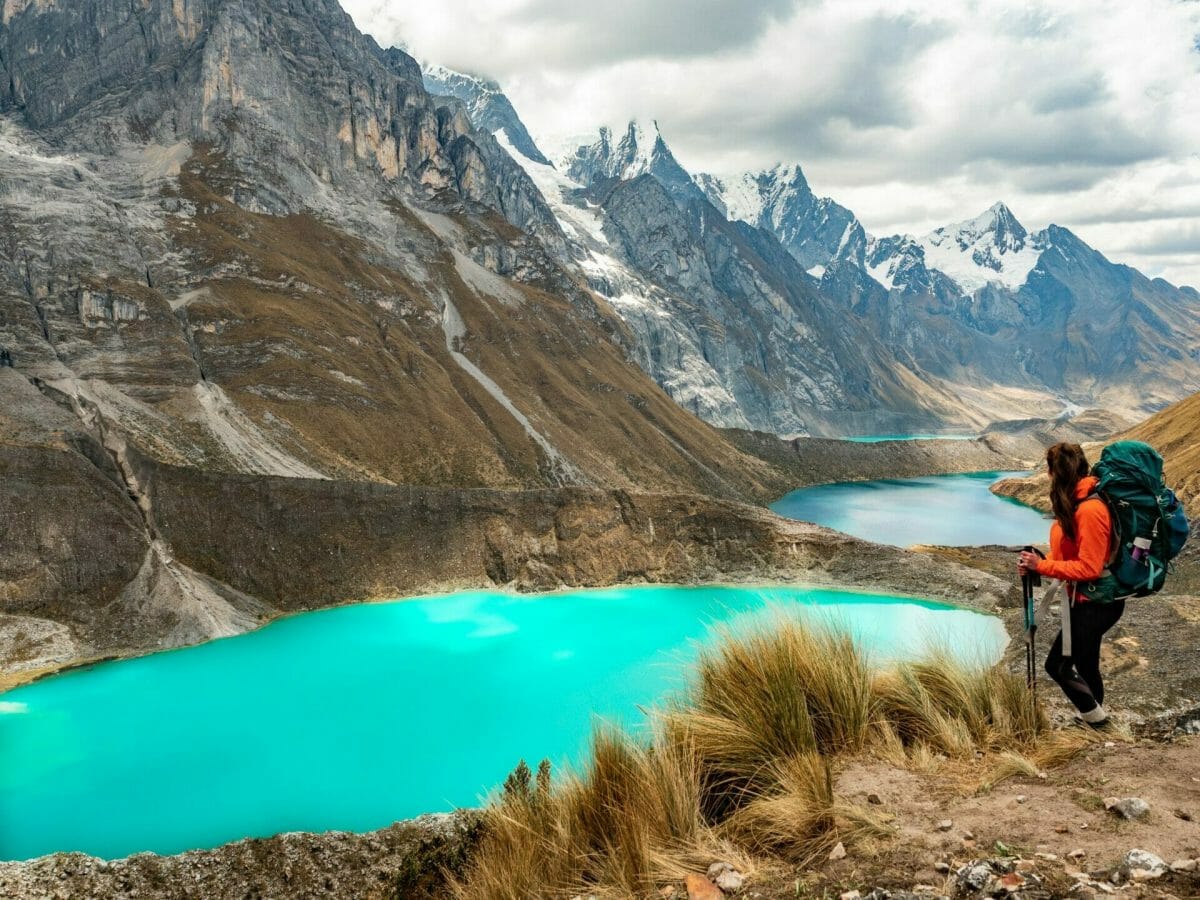 Seeing photos of Mirador Tres Lagunas (between Laguna Carhuacocha and Siula Pass) was a huge part of what made me want to hike the Huayhuash Circuit in the first place. After more research, I had about 50,000 other things that also made me want to hit the trail… but suffice to say that excitement is still at boiling point for day 3’s scenic adventure. The views today were rumoured to be some of the best along the whole Huayhuash, and I can now absolutely confirm that they were worth every heavy step.

Dad and Eileen packing up

Sometime during the night, dad woke up incredibly unwell and literally crawled out of the tent to vomit over the side of the cliff. It is a slow morning for the whole family.

Dad and Eileen decide to take the lower mule route today, bypassing the relentless climb up to Siula Pass, but also missing some of the best views on the trail. I’m sure it’s no one’s first choice, but it’s honestly lucky that dad is well enough to move at all. Eileen takes about 5kg of his weight, which leaves me to take a few kilos of hers again, but we will manage.

Even though I don’t need to wait for dad and Eileen this morning, the low-hanging cloud cover obscuring all mountain views encourages me to lurk around camp in the hopes that the grey morning will burn off into a clear day for my ascent of Siula Pass. By 9am, there’s only been minuscule movement in the clouds, but I am feverishly optimistic that nature will cooperate given my dedication to what dad likes to call clean living— basically, I deserve this.

Shortly after buying another community ticket and crossing the swing bridge to the opposite side of Laguna Carhuacocha, I leave dad and Eileen on their mule route and continue along the lakeshore alone.

It’s been a while since I found myself completely solo on the trail, so I relish the opportunity to walk at my own pace, stopping only when I’m tired and racing ahead when I get a spontaneous burst of energy. Almost miraculously, the sun starts burning through the clouds as I walk around the lake, so I also have views of Siula Grande and Yerupajá to coax me forward.

Clouds beginning to burn off

The start of a beautiful day in the Cordillera Huayhuash

Clouds starting to burn off above Laguna Carhuacocha

Before long, I develop some confusion as to the exact direction of the trail, but there’s no one within eyesight ahead of me and the nearest people behind (a Belgian couple) seem to have stopped for a lengthy rest. I follow what appears to be a worn path towards the end of the lake, and although it does not end up being the “right way”, I do catch a glimpse of other trekkers about 20min later and cross the river to get back onto the correct trail without much trouble.

The German trekkers, who are just leaving their spot near the glacier moraine when I arrive, strongly recommend walking up for views of Laguna Gangrajanca, so I ditch my pack momentarily and make a speedy climb to the top— I almost feel like I’m floating without my 18kg pack and I take off at a run before I realise that this isn’t a race and I can actually just walk at a normal pace.

Looking down at Laguna Gangrajanca from the moraine

Laguna Siula from the moraine

Laguna Gangrajanca from the glacier moraine

From where I left my pack at the trail junction, it’s about an hour to reach the famous Mirador Tres Laguna, but it is alarmingly slow going up the hillside, my enormous pack, the emerging sun, and the loose dusty path all conspiring to complicate my ascent. I can’t even see the intended viewpoint until I’m directly below it, so a majority of the climb is spent expecting the mirador to appear just around the next corner. I practically cry with relief when I spot a pair of people sitting with their cameras near a boulder a few minutes ahead. I can’t get my pack off quickly enough.

I spend an entire hour enjoying the ever-improving views over Laguna Gangrajanca, Laguna Siula, and Laguna Quesillococha, with Jirishanca, Yerupajá, Siula Grande, and Carnicero all providing a stunning alpine backdrop to the bright blue and green hues of the lakes.

I’m elated beyond belief that the weather has partially cleared despite the terrible prognosis this morning, almost as if Pachamama has turned it on just for me (it’s the clean living, I’m convinced).

Glacier views from the mirador

Amidst many photos and lots of snacks, I finally manage to catch my breath and am forced to consider the onwards climb up to Siula Pass at 4,830m. The guidebook estimates that it’s another hour upwards, and these times have so far been bang-on for me if I’m moving at a quick pace, so I resign myself to another breathless climb and set off. The first few minutes are fairly gradual, but it doesn’t take long for the trail to become torturously steep and for me to seriously contemplate chucking some of Eileen’s belongings into the lake below (don’t worry, Eileen, I eventually decided against it).

Either just in front or just behind me for the duration of the ascent is an equally breathless German couple, the same ones who pointed me up the glacier moraine earlier this morning. We attempt to motivate each other with the thought of a cold drink, as promised by our guidebook at the top of the pass, and are crestfallen to find a completely deserted Siula Pass, not only drink-free but also entirely devoid of other people. The spectacular views provide a worthy consolation.

Looking back at the mountains from Siula Pass

The sign for Siula Pass just barely in view!

After a modest rest at the top of the pass, the Germans and I begin our descent, joining forces for the final leg of the trek into Huayhuash camp. We are anticipating a journey just under 2hrs, which sounds entirely manageable, but soon proves more challenging than anticipated for our exhausted bodies.

Linda and Rafael set a great pace down the springy hillside, all of us eager to get our packs off and relax at camp. Now on the other side of Siula Pass, we enjoy even more wonderful mountain scenery thanks to Carnicero and Trapecio, tall peaks framing the unusual grass tufts (somewhat reminiscent of giant lily pads) that cover the valley below us.

Running down the mountain to check out the giant lily pads

The Germans leading the way down Siula Pass

Rafael trying to get the perfect camera angle

Giant lily pads in front of Carnicero and Trapecio

Rather quickly, we have just 40min to go before reaching camp, but this final part of the descent soon becomes the slowest 40min of my entire life. Every time I look down at my watch hoping to be halfway to Huayhuash camp, only a single minute has passed… 39 left to go, then…

The Germans are experiencing the exact same frustration and around this time all pleasant conversation has died off, everyone singularly focused on just getting down into the valley and finishing the day. When a rainbow of tents finally comes into view after 35min of determined powerwalking, I all but roll down the hillside.

Only 40min to our camp for the night

The Germans arriving into camp

Given the shorter route dad and Eileen took today, I was fully expecting to find our tent set up, hot water prepared for drinks, and a pair of well-rested parents. I find none of this and am actually a bit alarmed to speak to Marco, the trekking guide we met yesterday, who confirms that my parents have definitely not arrived.

Fearing that dad has become deathly ill and they’ve had to be rescued or that they are emergency camped in some other location, unable to hike another step, I am equal parts concerned for dad and worried about my own lack of tent or stove. Thankfully, Marco adopts me without hesitation, bringing me a bucket of hot water to wash my hands and feet, taking me into their group’s kitchen tent for an afternoon snack, and even offering up his own tent if my parents don’t arrive by tonight.

Although incredibly appreciated, his generosity proves unnecessary— Rafael taps on the kitchen tent while I’m drinking hot chocolate and eating popcorn with Marco and his chef to let me know that two people are descending the hillside into camp. I am incredibly relieved to see both dad and Eileen smiling, apparently far from the brink of death and thankfully not lost somewhere in the mountains, even if they are arriving hours after expected.

Their first comment is that the route was grossly misrepresented by the guidebook, actually quite long rather than the shortcut we all anticipated, but thankfully still lower and with less cumulative gain that the traditional route I followed. They are also ecstatic to report that it was a scenic hike, even on the mule route. Dad is feeling heaps better and, by all accounts, it’s been a great day for everyone.

After setting up the tent and doing some light housekeeping, we join Marco in his group’s dining tent for some soup and mountain stories, as will become our routine for the next few nights. We easily lose track of time and feel a bit sheepish when one of his paying clients opens the door to ask about dinner time, scuttling out like we’ve been caught in someone else’s home.

Back at our own tent, we descend into the now-familiar programme of cooking dinner, passing the bowls around until everyone is full, enjoying a final hot drink, and then doing some surface washing of the dishes before disbanding to brush teeth and get ready for bed.

Despite the fickle weather we’ve had all day, the sky is now perfectly clear, revealing about 10 million stars that remind me just how far we are from the city. Flanked by snowy peaks and laying directly beneath the glimmering Milky Way, sleep comes quickly and is filled with dreams of our next days on the trail.

Amongst My Fellow Pacific North-westerners in Buenos Aires