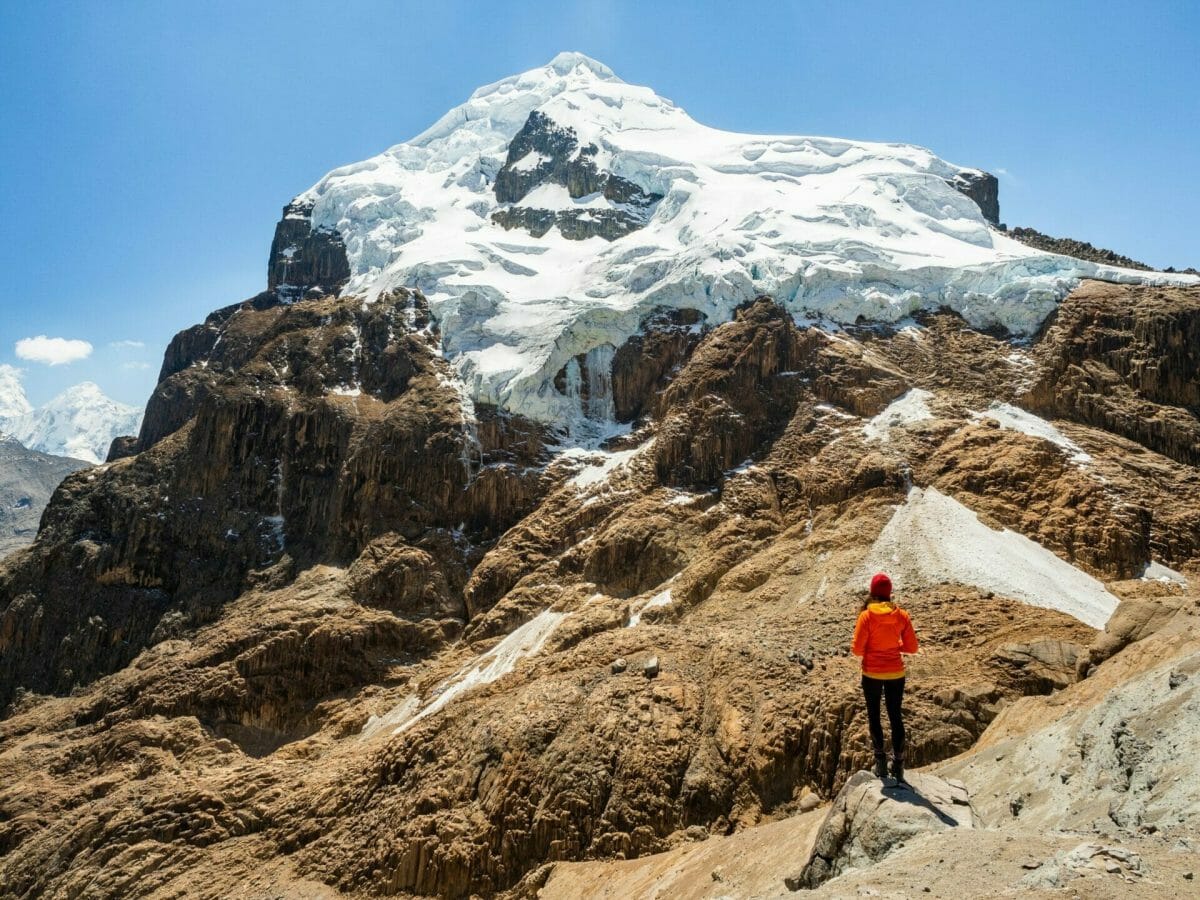 Today’s hike from Viconga camp, up Punta Cuyoc, and down to Cuyoc camp is surprisingly spectacular, close glacier views dominating the entire walk. Even more spectacular, though, is the challenging side-trip up Paso San Antonio— the highest peaks of the Cordillera Huayhuash tower above ice-blue lakes, and it’s genuinely hard to believe that places like this really exist.

We wake up at our standard 6am and slowly go about our morning routine. Ordinarily, there is little rush to get onto the trail and we don’t mind being the last ones at camp— this morning, I am a woman on a mission. We’ve awoken to impossibly clear skies and lots of sun, but it’s anyone’s guess how long we will enjoy such perfect weather. From our Cuyoc camp this afternoon, I am hoping to climb Paso San Antonio for sweeping views, so naturally time is of the essence.

In the end, I leave dad and Eileen behind in favour of hiking with the Germans, Linda and Rafael, a somewhat speedier pair. Together, we depart camp around 8.45am and begin the gradual but unyielding climb up to Punta Cuyoc at 5,050m, topping out just over 2hrs later.

Despite my assumption that the only spectacular views today would be found on Paso San Antonio, we enjoy spectacular scenery throughout our 700m climb, especially of jagged Nevados Puscanturpa and Cuyoc’s enormous and alarmingly close glacier.

Staring up at Cuyoc

Atop the pass, our highest point on the trek thus far, we break for snacks in front of imposing Cuyoc, but are soon driven down by the wind. The other side of the pass is far less gentle than the easy trails we enjoyed during the ascent, leaving us to skid halfway down the mountain on loose dirt and scree.

Linda is initially quite wary of the descent, but Rafael’s suggestion that she pretend she’s skiing seems to realign things and she is soon flying down the face of the mountain faster than I can keep up. We are all relieved when solid ground reappears for the final stretch of our descent into camp.

The view from Cuyoc camp

Wildflowers along the Huayhuash Circuit

By 12.45pm, we roll into the wide, open pampa of Cuyoc camp and throw our things down. The Germans decide to spend their afternoon relaxing in the sun, somewhat put off by the clouds beginning to roll in, but I am still determined to ascend Paso San Antonio, clouds or not. I’ve also decided that I will climb the pass a second time in the morning, since tomorrow is another short day on the trail to nearby Cutatambo camp. Now all that’s left to do is wait for someone who knows the way…

The guided group reaches the camp not terribly long after us and I corner Marco, asking if his group will climb the pass. Apparently none of them are feeling particularly energetic this afternoon, but he agrees to walk with me after getting his clients organised. We are setting off for the pass just as dad and Eileen arrive into camp, smiling encouragingly at my plan to double-climb the pass for the best views and waving me on while they set up the tent and relax after their own breathless climb of Punta Cuyoc.

Reports of climbing Paso San Antonia vary widely, but Marco thinks we will be able to get up in 90min since I’m reasonably quick (especially unburdened of my 18kg pack— he’s even carrying my water and camera for me, so weight is no longer an excuse).

Sure enough, we reach the pass in 1hr20min, hustling the entire way up the alarmingly steep pass. There are times where I struggle to even get purchase on the near-45-degree slopes, but we eventually crest over the top of the final uphill climb to panoramic views of Siula Grande, Siula Chico, and Yerupajá that make me forget every challenging step.

Not satisfied by any old pass views, Marco leads me on a scramble up the rocks to an even higher point (he estimates around 5,080m), from which we can stare down the valley towards Laguna Jurau and Joe Simpson’s base camp below Siula Grande. I just finished reading Touching the Void and we are planning an extended sidetrip into this part of the range, hoping to discover more of the rugged beauty described by Joe in the lead up to his infamous accident, so the scenery is not wasted on me today.

Scrambling to a higher vantage point at Paso San Antonio

Looking out on Siula Grande from Paso San Antonio

An afternoon at Paso San Antonio

There’s not a single other human in sight and the only sound is of the wind howling over the pass— both the scenery and serenity are overwhelming. But this is the Cordillera Huayhuash for you, the most spectacular alpine vistas you’ve ever imagined and yet largely off the beaten path.

Part of me wants to tell every single trekker and traveller about this mountain paradise, but the other wants to keep it a secret, protecting these trails from overcrowding and the inevitable commercialisation of other popular hikes in Peru. I try to imagine sharing Paso San Antonio with 80 people, but balk at the thought.

We lose the entire afternoon at the top of our rocky perch, neither of us wanting to pull away from the expansive views. Even though this is Marco’s office, I can tell that he truly never tires of moments like these— for the first time or the 50th, there is always something magical about the glacier-capped peaks in front of us. I feel a profound envy that he gets to spend practically all of his days out here, sharing these and other mountains with a rotating cast of impressed hikers and climbers. The thought of an office job in Melbourne feels even more suffocating after feeling the breeze at 5,000m.

Coaxed down by the sudden chill, we begin what feels like an agonisingly long descent back to camp, skiing down an alarmingly steep slope of fine silt and eventually trudging down a trail that feels far more precarious than I remember.

Marco’s love of the mountains is infectious and I make him tell me stories of successful ascents, living vicariously through climbs I will likely never have the skill to undertake, but also stoking a new-found interest in mountaineering that hopefully will foster another trip to Peru in the future.

Back at camp, dad and Eileen have taken over the group’s dining tent, all of Marco’s paying clients passed out in their tents after an exhausting 3hr day of carrying 4kg daypacks..

Since Marco owns the company that will be picking us up at the end of the trek, we finalise plans to bump our end-date, allowing us an extra day to explore Laguna Sarapacocha and Joe Simpson’s base camp without the rush of moving camp. It means we will be rolling into Quartelhuain camp in the afternoon of day 10 ready for our ride back to Huaraz rather than camping there on the 9th night and getting retrieved in the morning. We are all thankful for the cushion in our schedule that allows us to extend the hike (not to mention the somewhat overzealous packing that has easily guaranteed food for an extra day on the trail).

Now dark and rapidly dropping below zero, we retreat to our tent for dinner, dad cooking in the vestibule while we all sit in our sleeping bags. Marco generously delivers some tea for my worsening cough, but otherwise the evening passes easily as the 3 of us chatter about today and the views still to come tomorrow. Already, this hike has exceeded all expectations and we remain captivated by every moment along the trail— Paso Santa Rosa tomorrow promises to be no exception, and we fall asleep dreaming of jagged peaks and clear, blue skies.

Highlights from 10 days on the Huayhuash Circuit

A Tribute to Earth’s Most Majestic Creature, the Llama