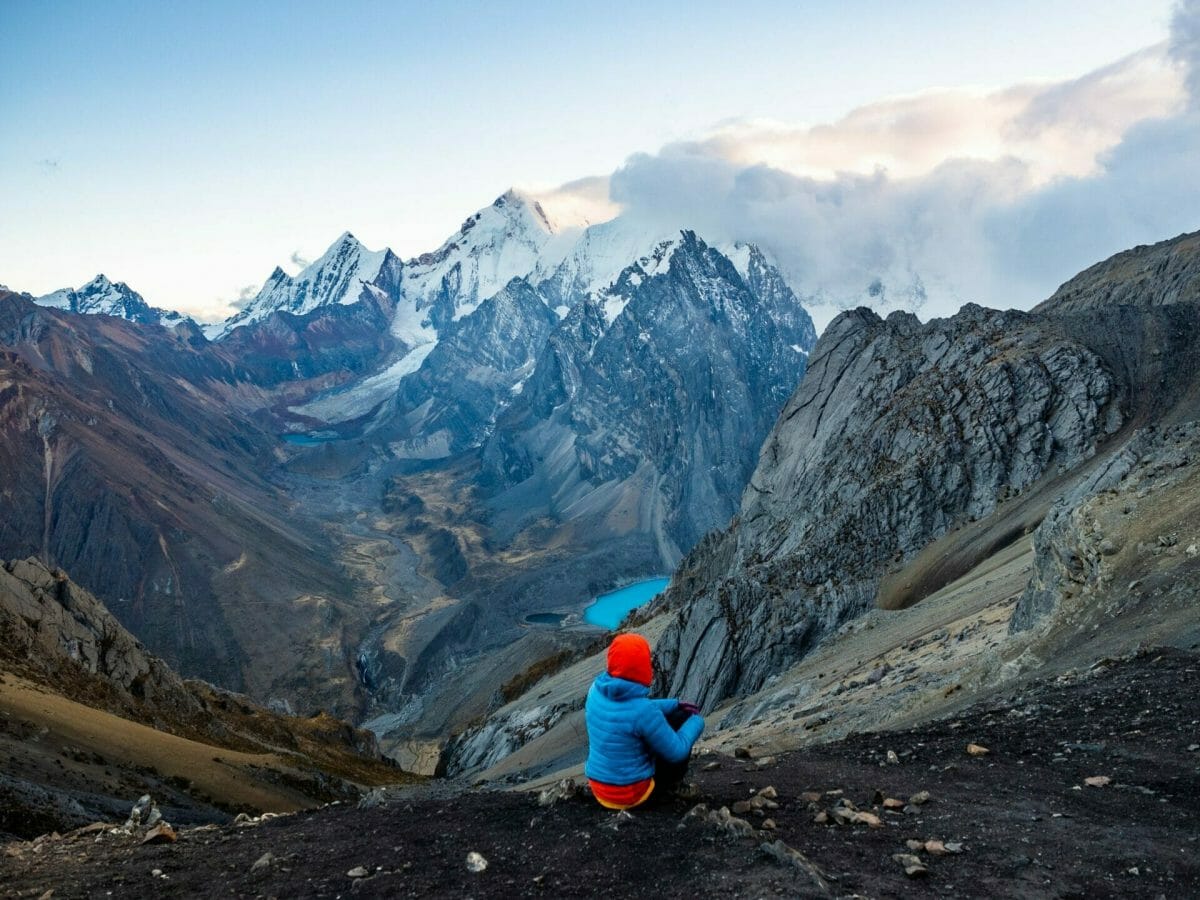 Following a second ascent of Paso San Antonio for sunrise views, today’s hike takes us up and over Paso Santa Rosa and down to Laguna Juraucocha for a spectacular wild camp at the base of a glacier. Snow flurries in the early morning blanket the trail in white and greatly complicate the already challenging navigation, but the views we enjoy today are dramatic and completely wild, the unpredictable conditions only adding to the experience.

When I wake up at 4.45am to climb Paso San Antonio for sunrise, there’s a fair bit of snow on the ground, but a promising cluster of stars that suggest the morning might be clear. I decide to risk it and set off with Marco for the second ascent in about 12hrs. No sooner are we across the pampa than our headlamps begin to catch on snowflakes, falling gently at first, but soon increasing to a small flurry. It doesn’t bode well for the view..

Without stops to strip off layers or enjoy a snack in the sun, we make it to the top of the pass in an hour (although I’m pretty sure Marco could run the entire thing in half that time if not waiting for this sea-level gringa to drag herself up). The sun is only just beginning to rise over the mountains and most of our view is obstructed by thick, angry-looking snow clouds, but the wind is absolutely pumping and it hardly takes anytime for a majority of the clouds to clear.

While we look on, cameras in hand, Yerupaja and Siula Grande materialise above Laguna Juraucocha. It may not have been the crystal-clear morning I was hoping for, but the view is possibly even more spectacular when you watch it emerge through thick clouds.

Back at camp just after 7am, the snow has dramatically increased and our tent now looks like a small prop in a giant snow globe. I eat breakfast inside the tent, hiding from falling snow, while debating the many route options for the day with dad and Eileen.

Given the almost total cloud cover that has accumulated since my hike to the pass, crossing Paso Santa Rosa at 5,060m is not as appealing as it would otherwise be. We contemplate hiking out towards Huayllapa, a tiny village just off the main route, as both the German couple and the guided group are doing, but in the end, we decide to tackle the pass despite the weather and find camp somewhere near the base.

We say goodbye to Marco and his group and the German couple and then set off around 9.30am in the direction that we believe to be Paso Santa Rosa. The current blizzard conditions prevent any degree of certainty and, as it turns out, completely obscure the correct route.

Dad wandering through the snow

After 2.5hrs of what can only be described as wandering aimlessly along the snow-covered moraine in search of the trail, the clouds finally let up enough for us to see a faint trail in the distance. Using a combination of GPS and good old common sense (although this has admittedly failed us in the past), we determine that we are several kilometres off the desired pass, contouring along the scree-covered hillside until we finally get ourselves into the correct position. It is an enormous relief and we celebrate over an extended snack break, believing ourselves to be fairly close to the pass.

As it turns out, we have another 45min of climbing up to Paso Santa Rosa, having lost much of our vertical headway when we descended under a large rocky outcropping over to the correct pass. The silver lining of the morning’s confused stumbling, though, is that the snow has completely stopped, the sun is out, and much of the cloud cover has lifted from the mountains.

The result is an absolutely breathtaking view from Paso Santa Rosa, definitely one of the most stunning scenes we’ve seen during the whole trek thus far, and totally worth the late start.

In addition to being the high point of the trek at 5,060m (not counting the scramble to 5,080m that I did yesterday), Paso Santa Rosa, also called Paso Jurau, has got to be the single windiest place in the world. I am nearly bowled over during the last breathless steps up to the pass, cresting excitedly over the rocks only to be slammed by an enormous wall of wind that threatens to return me all the way back down to the valley floor.

Still, I sit directly in the centre of the pass, layered up in all my jackets, blissfully immune to the glacier winds and aware only of the incredible view stretched out in front of me. The peaks and lakes are the same as those seem from Paso San Antonio, but from a totally new vantage point that makes everything seem new.

Until dad and Eileen arrive, the only sound is the wild howl of the wind up the pass, an intense sound that completely strips away all other thoughts— it’s impossible to think of anything but this view or to imagine yourself anywhere other than on this pass.

Me, dad and Eileen at Paso Santa Rosa

Me and Eileen at Paso Santa Rosa

We enjoy a leisurely lunch at the pass (behind some rocks so our food doesn’t completely blow away) before beginning the long, steep descent towards Laguna Juraucocha. As promised by the guidebook, much of the trail is loose scree and other sections are even just loose dirt, neither of which provide any grip for our downhill journey.

Somehow we do eventually reach flat land, but the relief is short lived— we decide to skip the official campsite in Cutatambo and instead set up our tent near Laguna Juraucocha at the base of Jurau, which necessitates even more descending on rocks of all shapes and sizes. When we finally find the perfect spot for our tent, I could kiss the flat ground.

The rest of the evening in our impossibly scenic campsite is spent ogling the mountains and glacier that tower over us and wolfing down some dinner before passing out around 730pm from sheer exhaustion.

Camping at the base of Jurau

Dad getting water from Laguna Jurau