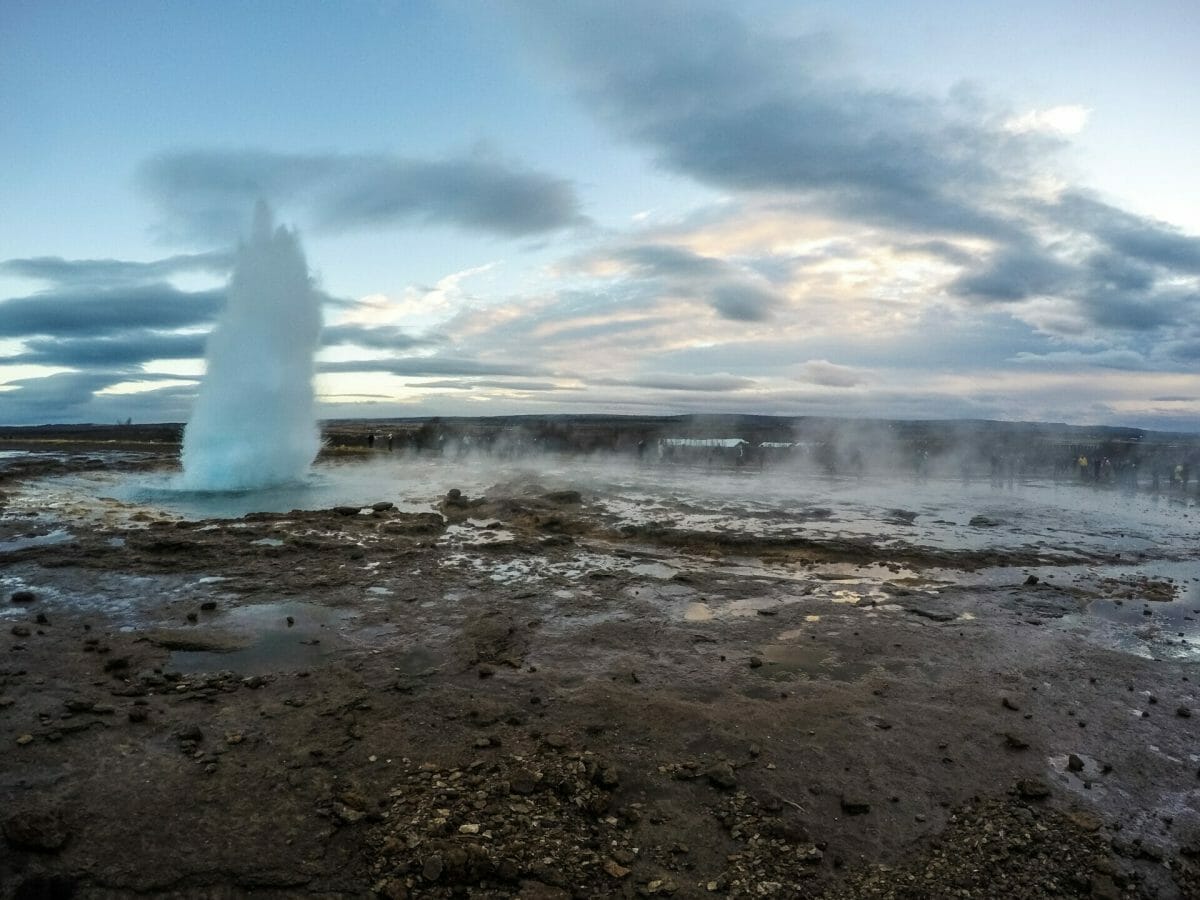 We wake up and eat breakfast in the pitch black, which has become standard now. By 10am, we are on the road from Holt, driving about 130km through the Golden Circle to our hotel for tonight in Geysir. This popular 300km loop from the capital has several natural wonders along the way: a large waterfall, a geothermal area with geysers, and a national park.

Unlike most people, we won’t be driving it as a day trip from Reykjavik, opting instead to stay out near the geysers for easy access to Langjökull, a big snowy glacier, for some fun snow activities tomorrow.

While we’ve been in the middle of nowhere for a few days now, often the only car on the road and the only people at the waterfall, we are now heading into probably the busiest area of Iceland. It’s not long before we are sharing the road with tour buses loaded up with people from Reykjavik, all coming to experience the Golden Circle on day tours.

Granted, it wouldn’t be considered busy anywhere else in the world, but because it’s Iceland and we have had so much isolation lately, it feels like throngs of people. I imagine it might actually be painfully busy in the summer. We are lucky that we can still take photos with no one (very prominently) in them, so I suppose I can’t complain too much!

We make a few random stops along the way to see waterfalls and a crater before getting to the start of the Golden Circle. We are definitely feeling the crowds at Gullfoss, but are incredibly impressed by the constantly active geyser Strokkur in the geothermal area around Geysir. We’ve seen our fair share of waterfalls by now, but the spouting geysers provide some much-needed variety.

Our first stop today is a gorgeous short waterfall. We spend about 10 minutes out of the car walking around the falls and snapping photos before we have to run back because of the freezing wind. By far our coldest day yet!

This crater is the only natural spot that has charged entry (400ISK) on our whole road trip, but it is lovely and we willing pay the $5 to walk around the rim and explore down to the lake.

You’d think we’d be tired of waterfalls by now, but they are all so different! We have Faxi waterfall entirely to ourselves and cleverly put on mittens this time so we can explore in the cold wind without fear of losing fingers to hypothermia.

Callum hasn’t heard of geysers before, so he is unimpressed by my fun fact that geysers are actually named after Iceland’s Geysir! We wander around all the steaming pits of water and see the very active Strokkur spout water every couple minutes the entire time we are there.

Our final stop today is, surprise surprise, a waterfall. It is definitely beautiful and very impressive, but the thing that strikes me most is the crowds. We aren’t in the middle of nowhere anymore and have to share attractions with dozens of other eager travellers. This is the most people we’ve seen the whole time we’ve been here, including our arrival at the airport. That may or may not be factually correct, but it really feels that way.

We really enjoy the Golden Circle, but we both feel like there are so many amazing waterfalls and canyons and glaciers up the east coast with far fewer people and less hype. It’s another great day in this wonderful trip, but the popularity prevents it from being #1. I would even recommend people to skip it unless they really only have 1-2 days in Iceland. There are way better places to see with a fraction of the crowds the farther you get from Reykjavik, so I would definitely advocate for exploring those more.

Read more about our adventures in Iceland

Check out these posts for details on planning your own trip

LAND OF FIRE & ICE: A GUIDE TO PLANNING THE ULTIMATE ICELAND TRIP