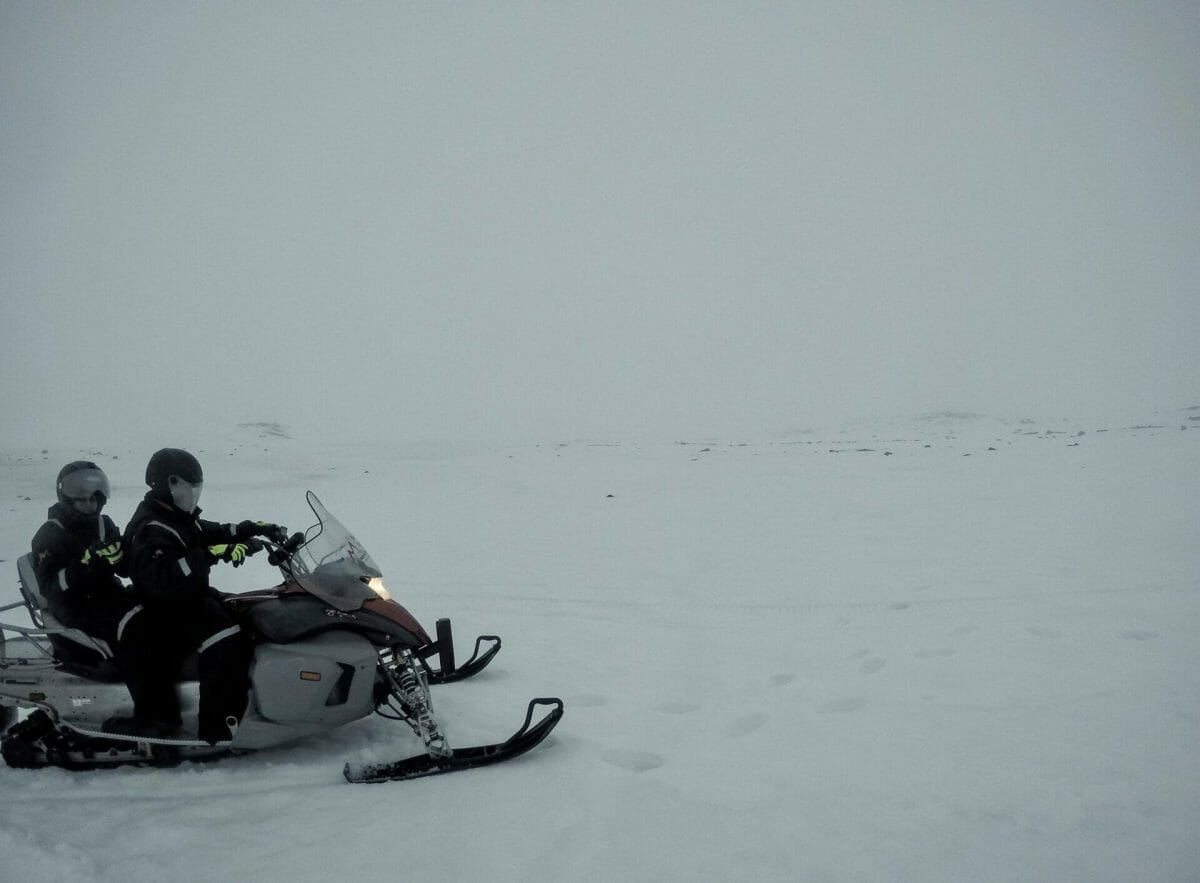 So, we found ourselves with some spare time. After the cancellation of our ice cave tour a few days ago, we managed to get ahead in our sightseeing and yesterday we over-eagerly blew through several of the stops I had intended for today, and now we’re left with a rather open day. What to do, what to do…

We also had a spare $400 from the ice cave tour cancellation. Practical Cal suggested we save that money for when we get back to Australia for, you know, living expenses like our rent, but how often are you in Iceland? It’s incredibly far from us and it could be years before we ever come back, if we do even make it back (though I have plans to, believe me). Still, there’s a lot of world out there. So I booked very expensive snowmobiling on Langjökull glacier with Mountaineers of Iceland and we went to bed excited for some adventure.

All the details: Snowmobiling on Langjökull Glacier

Cost: There are a million companies that offer snowmobiling on Langjökull glacier, including ones that leave from Reykjavik and ones that leave from Gullfoss (in the Golden Circle). The price only seemed to vary a few dollars between companies, and most had good reviews, so we sort of randomly picked Mountaineers and it was great. We paid about $300 each for about 2 hours of actual snowmobiling.

Getting there: Most companies offers different meet-up options of varying expense, the most logical being to meet the group in the Gullfoss car park (but there are also pick-up options if you haven’t hired a car). A large 4WD vehicle will then transport you to the snowmobiles.

Where to stay: Geysir Hestar is perfectly located to explore the Golden Circle (€100 per night for a twin room with shared bathroom).

Top tips: Mountaineers will provide you with a snowsuit and gloves, but still make sure you have plenty of warm clothes to cut the wind-chill and waterproof boots!

Our tour doesn’t begin until 1230, so we enjoy a very extended sleep in and slow pack up from the hotel, followed by a bit of lounging around the car (mostly editing photos and snacking) after we check out. We poke our heads into a café, but are scared off by the surprisingly small $20 sandwiches and decide we’d rather stick with our single can of $10 peanuts.

Finally, meeting time rolls around and we rendezvous with our guide in the Gullfoss car park. Thankfully, we only have two other couples with us. I know I’m a princess, but I really hate large groups, I hate impersonal tours, and I hate people in my photos. Spoilt Brooke is very pleased by the low number of people, although she is not impressed by having to wait 20 minutes for one couple to arrive.

We drive about 40 minutes, mostly off road, to reach a hut at the base of the glacier where we are kitted out in snow suits, helmets, and gloves before driving a few hundred metres to the snowmobiles. Obviously Callum will be operating the snowmobile—it’s better for everyone involved. He is chomping at the bit to just take off and listens to the instructions for operation with impatience. The other two couples do not look as confident and seem much more cautious with their driving.

One couple actually tips the snowmobile over within the first few minutes of driving and I am now terrified the same thing is going to happen to me. Not because Callum isn’t a good driver, but because he has no fear. Me, on the other hand? Much fear.

Our guide gave us a big talk about how you have to keep your legs glued to the skidoo even if you tip over, because if you stick your leg or arm our when you’re falling, you’ll likely break it. Hey now, just try and fall over without catching yourself, I’m not sure it can be done. Instinct just kicks in! So yes, I’m concerned for myself and my fragile legs.

We can see only a stone’s throw ahead of us due to the thick clouds/fog, but at least it isn’t raining and we are relatively dry. It’s noticeably colder on the glacier than it was on the road, but that magnifies once we start driving the snowmobile and have freezing glacial wind whipping us in the face. To save my nose from falling off, I improvise a balaclava.

We zip around the glacier, taking tight turns that threaten to tip us over and reaching unsafe speeds, thanks to Cal, who thinks he’s a race car driver. I’m white-knuckling on the back, while also acting as team photographer, because photos are more important than holding on for safety.

When we finish the ride and return to the start, a huge tour bus full of people is just preparing to depart on their ride and our guide slips us along for a second hour! It’s massively different riding in a group of 30 snowmobiles compared to 3, so we certainly don’t reach frightening speeds like before, although that doesn’t stop Callum from trying.

On the last 20 minute stretch, I hop into the front and drive. Now, I have an intense phobia of driving, and that includes cars, ATVs, scooters, and, surprisingly, bikes. It’s ridiculous, I know, but I’m an absolute spastic and lack even the basic coordination skills necessary to operate motor vehicles. Today, I learn that Skidoos are no exception, but at least I don’t tip ours over like the girl from that other couple. I will treasure that, truly.

After our 2 hours of snowmobiling, we make our way back to their base to return the snow suits and then are driven back to Gullfoss where we began. We drive over an hour to reach our hotel that night back in Reykjavik, so we are exhausted by the time we shower and go to sleep. Only one day left, though, so we have to make it count!

Read more about our adventures in Iceland:

Check out these posts for details on planning your own trip:

LAND OF FIRE & ICE: A GUIDE TO PLANNING THE ULTIMATE ICELAND TRIP

And read my article on We Are Travel Girls for more inspiration: