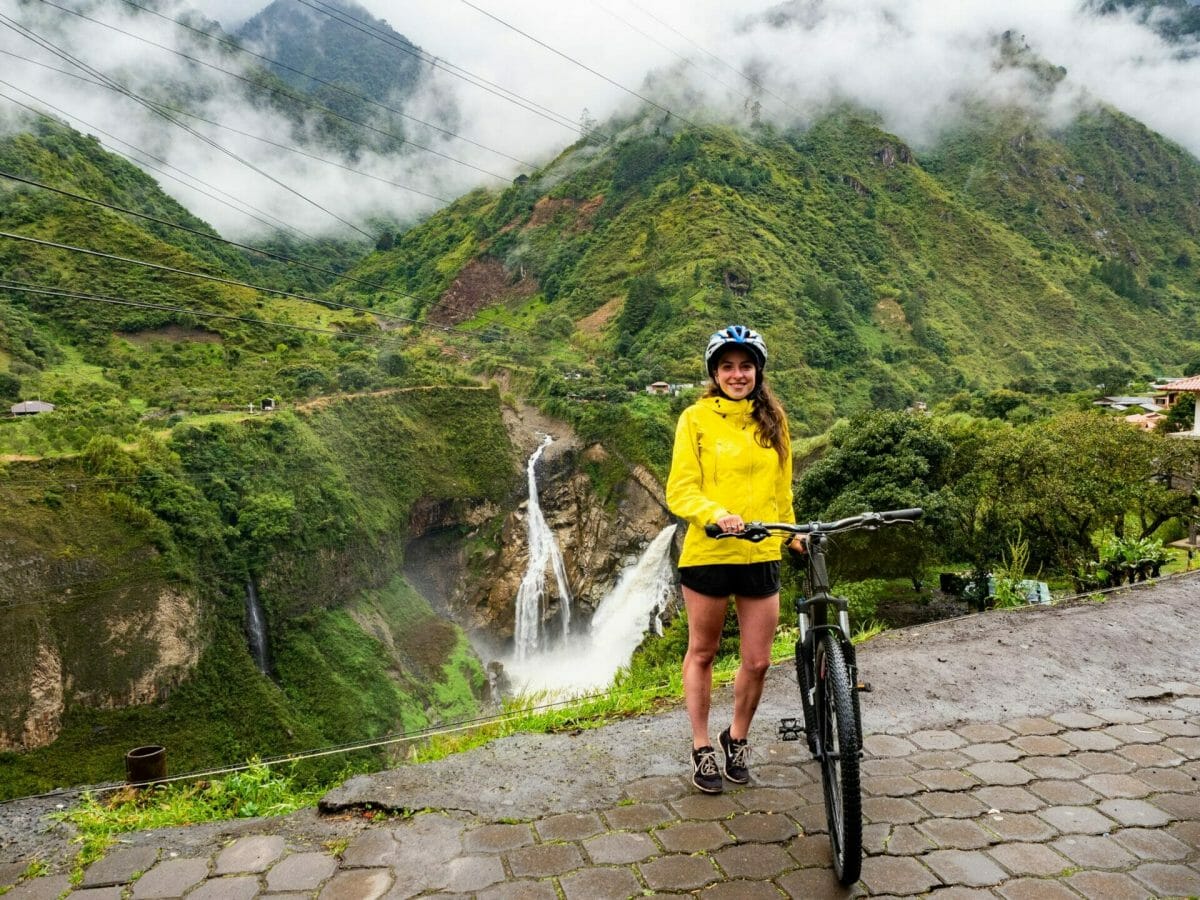 Situated in the misty foothills of Volcán Tungurahua, the jungle air thick with a palpable, infectious energy as countless cascadas drum out a beat amongst the trees, Baños is THE place to go for outdoor activities in Ecuador. Amazingly, its high adrenaline offerings are every bit as spectacular as the setting.

Perfectly blending Baños’ lush water-rich scenery with an adventurous DIY excursion through the mountains, cycling the Waterfall Route should be at the very top of your list while in Ecuador’s adventure capital. This post contains everything you need to know about setting off to visit Baños’ best waterfalls, ziplining over the trees, and finding beautiful swimming spots along the way, all without the need for a tour or guide.

Read more about Baños: 9 AMAZING THINGS TO DO IN BAÑOS: A GUIDE TO ECUADOR’S ADVENTURE CAPITAL

About the Waterfall Route

The Waterfall Route, or the Ruta de las Cascadas, is a 25km cycle route from Baños towards the town of Puyo, taking in countless waterfalls, ziplines, cable cars, swings, and even a bungy jump along the way. Although the route technically follows the entire 61km highway, only the first half is realistically cycled in a day (and it’s the highlights, anyway), so that’s what I’ll cover in this post.

As mentioned, most of the Waterfall Route does follow the highway, making for reasonably easy way-finding and delightfully manageable terrain, but necessitating some road-sharing with cars. Another bonus is that the road is almost exclusively downhill from Baños, so this trip really is suited to cyclists of any fitness level. Once at your final destination, whether it’s the popular end-point at Paílón del Diablo or my recommended finale at Cascada Rocío Machay, there are frequent shuttles that will return you and your bike back to Baños for just $2USD.

Given the popularity of the Waterfall Route, every tour agency in the entire town, and even some of the hostels, will be hiring bikes to eager travellers. I paid $10USD for my bike from GeoTours Ecuador (Calle Ambato right in the centre of Baños), and this seems to be a pretty standard rate for a full day of hire.

Make sure you get a helmet and definitely check the bike before leaving town, as you’ll want excellent brakes for this ride. As previously mentioned, you’ll be able to catch a shuttle back to Baños from Paílón del Diablo or Cascada Rocío Machay ($2) at the end of the day, and this doesn’t need to be reserved in advance.

The Waterfall Route from Baños is seriously such a spectacular excursion that I’d recommend dedicating a full day to explore properly. Make an early start so you have plenty of time to stop off at each waterfall, partake in some of the crazy adventure activities, and just generally gawk at the breathtaking scenery without having to check your watch. We set out at 9am and made it back around 6pm, a seriously full day, but I wouldn’t have wanted any less time than that!

Although a majority of people only cycle 18km from Baños to the Paílón del Diablo, the most impressive waterfall on the route, I’d encourage you to finish off at Cascada Rocío Machay instead (if time allows), since it’s the best place to actually have a swim. Depending on the humidity and how much sweat/grime you’ve accumulated over 20km+ on a bike, this may not only be a luxury, but also something of a necessity.

Heading east from Baños along the main highway, the road quickly becomes a real downhill thrill-ride, zipping along next to cars and zooming through an eerie tunnel cut into the mountainside. With the help of momentum, it doesn’t take long (about 25min) to reach the first stop of the day, thundering Cascada de Agoyán.

From this stop, you’ve got excellent views across the valley to the double waterfall spewing out of the verdant mountains, plus a selection of interesting activities. I personally did the flying fox zipline, which offered an amazing aerial view of the cascada and Rio Pastaza below. It wasn’t the most adrenaline-pumping zipline I’ve ever done, but for just $10USD, it was extremely worthwhile. You can choose to return via a second zipline or in a little cable car, and I chose the later so I could enjoy a bit more of the scenery, which really was incredible.

Returning from the zipline at Cascada de Agoyán

Continuing on the bikes for about 15min, you’ll come to Cascada Manto de la Novia, or Bridal Veil Falls (which seems to be an incredibly popular name for waterfalls worldwide, as I can think of at least several others in Aus, NZ, Canada, and the US). This is another gorgeous cascada spilling over the lush mountainside and into the Rio Pastaza, and there are even more activities around this bustling roadside viewpoint.

The best way to experience Cascada Manto de la Novia is by taking the little cable car across the gorge ($1) and then walking down to a viewing platform nearer to the falls, but there is also a large swing, another flying fox zipline (with multiple lines running parallel), and what appears to be a human catapult.

From Cascada Manto de la Novia, it’s a further 25min onwards to what most consider to be the main event, the spectacular Paílón del Diablo, or Devil’s Cauldron. There’s an impressive network of paths and viewing platforms surrounding the falls, so this is sure to be a much longer stop than the previous two if you want to properly explore (and I’d highly recommend you do!). After paying the $1.50 admission fee, you can cross the suspension bridge and descend to varying platforms to view the falls. It’s a pretty fair walk, all said and done.

One of my absolute favourite experiences was the Grieta al Cielo, or Crack to Heaven, a narrow tunnel through the rocks that leads you directly below the thundering falls. At times, you have to literally crawl through tight passageways and even squirm through a cave, and once you come out under the cascada, expect to be fully saturated— but it’s amazingly fun and such a unique view of the famous falls.

After exploring Paílón del Diablo, grab some lunch from one of the many restaurants surrounding the complex. There are some nice bars where you can enjoy a beer overlooking the mountains and a number of traditional restaurants serving up insanely good food, grilled fresh right in front of you. As we were walking by, one of the ladies handed us a bite of whatever she was currently searing up, and it was so unbelievably good that I just ordered it without any further questions. It ended up being one of the best meals I’ve ever had in Latin America.

Saturated in the Grieta al Cielo

Under the flow of the Devil’s Cauldron

Most people seem to wrap up their day at El Paílón del Diablo, but less than 15min down the road is Cascada Rocío Machay (also called Cascada del Rocío or just Cascada Machay on some maps), one of the only places to swim along the route and probably my favourite stop because there were practically no other people.

There’s a rack to lock your bikes up just off the road and then there’s a 15min or so walk down to the waterfall along wooden stairs and swing bridges. For the best swimming spots, walk out towards the river and you’ll find some deeper pools where you aren’t constantly at risk of being sucked over the edge by the current.

It’s slightly slower climbing back up to the bikes thanks to the steep hillside, but it’s certainly worth the effort. You can typically catch a shuttle back to Baños right from here, but in the event that there’s not a lot of other people or it’s getting a bit late, there’s always the option to cycle back to El Paílón del Diablo, where 10x as many shuttles seem to be operating, thanks to the crowds.

9 AMAZING THINGS TO DO IN BAÑOS: A GUIDE TO ECUADOR’S ADVENTURE CAPITAL

WHAT TO DO IN QUITO: 12 AWESOME THINGS TO DO IN ECUADOR’S CAPITAL

Top things to do in Buenos Aires, Argentina

Photo journal: adios, South America. Thanks for the tan.