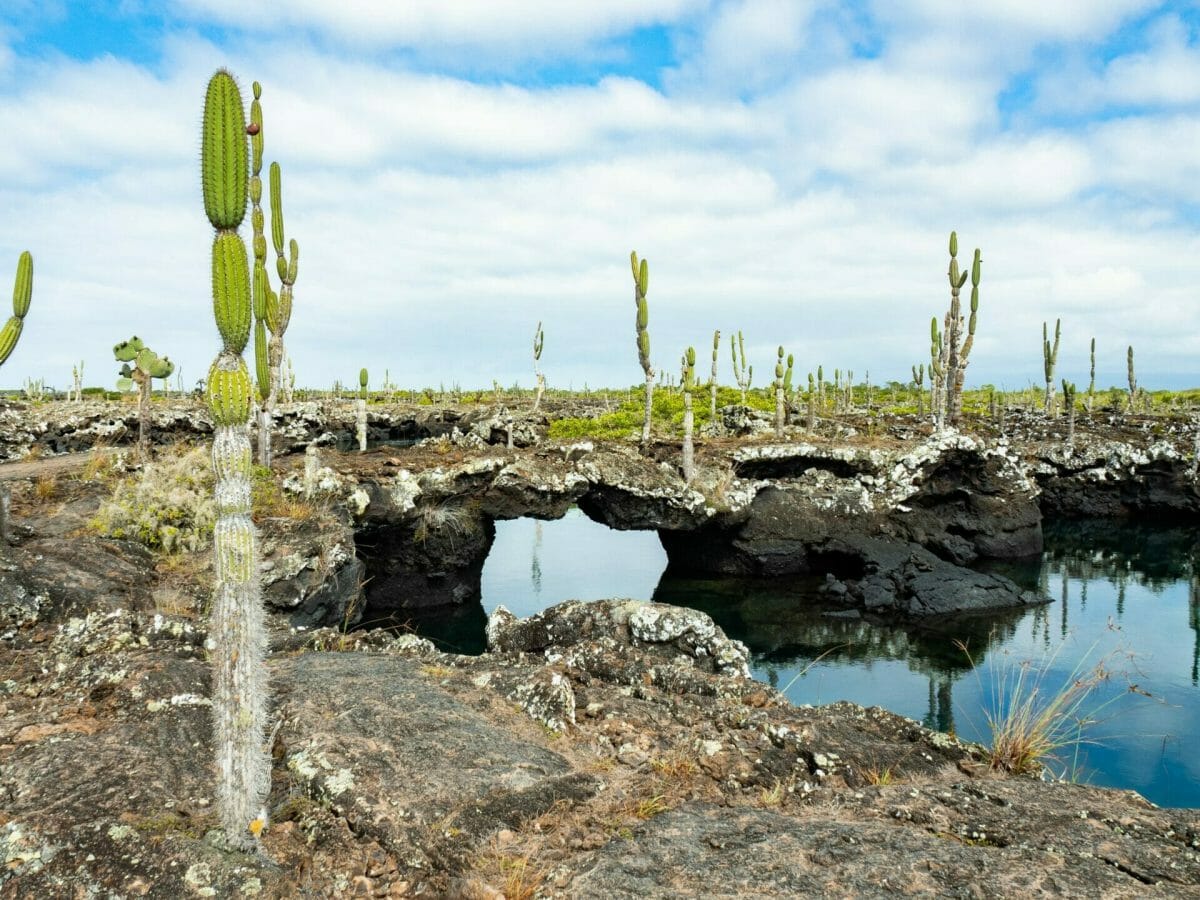 As the largest of the Galápagos Islands, activities on Isla Isabela are in no short supply. Beautiful beaches, turtle and shark-filled swimming holes, challenging volcano hikes, and wetlands abustle with birdlife cover every inch of Isabela, making it a genuine challenge to settle on only a few excursions and day tours during your time on the island.

If you manage only a single tour, though, it has to be Los Tuneles. By all accounts, this is the best day tour on Isla Isabela, but arguably also one of the best snorkelling spots on any of the Galápagos Islands. For more marine life in a single location than you ever imagined possible, including reef sharks, sea horses, Golden Rays, Spotted Eagle Rays, Manta Rays, sea turtles, and Galápagos Sea Lions, Los Tuneles is truly as good as it gets.

All the details: Snorkelling Los Tuneles

Cost: Pahoehoe offers half-day (5hr) tours out to Los Tuneles for $145USD, which includes a guided walk around the lava platforms where you can see Blue-Footed Boobies and other marine birds, followed by snorkelling in one of the best sites in the entire archipelago. If you have some flexibility or are travelling during shoulder or off-peak season (anytime not June, July, August, or December), you can book directly at the Pahoehoe office in Puerto Villamil when you arrive and it tends to be much cheaper.

Getting there: The Pahoehoe office is located in the middle of Puerto Villamil, an easy walk from any accomodation in town. You’ll meet the tour group here and then be transported to the boat in a shared vehicle, and usually returned directly to your accommodation after the tour.

Where to stay: Hotel Star Fish offers incredibly comfortable rooms for around $65USD/night (for 2 people) in Puerto Villamil, an easy walk to anywhere in town including the Pahoehoe tour office and the ferry.

Top tips: Bring your iPhone or an SD card to the Pahoehoe office after your tour and the staff will transfer any photos taken on the day over to you. The guide usually takes photos for each traveller or group on the lava tunnels and shoots a GoPr during snorkelling, so if you don’t have an underwater camera, you can always grab some of their shots.

Mum and I walk down to the Pahoehoe office in Puerto Villamil just before 7.30am to try on wetsuits and grab our snorkelling gear for the morning’s adventure out to Los Tuneles. Joined by only a few other travellers, we set off in a speedboat around the southwestern side of the island, watching the coastline whizz by and taking in unique rock formations on the 40min ride. As we near Los Tuneles and the boat is rocked by waves in the shallow, lava-filled water, the driver slows to wait for a break between sets before cruising the final distance to land.

Although Los Tuneles is primarily a snorkel tour, we hop out of the boat to enjoy a brief walk around the fascinating lava formations, spotting local flora and fauna as we go— and it ends up being a real highlight of the day. Los Tuneles, so named because of the tunnels that wind through the solidified lava, were created by intense waves crashing into the rock, carving out and collapsing most of the settled lava to create bridges and caves.

The result is an almost otherworldly landscape of rough, cactus-covered lava platforms over calm, cobalt sea. And despite the seemingly inhospitable volcanic environment, Los Tuneles is home to an insane abundance of wildlife, all variety of birds hopping between cactus spines, Blue-Footed Boobies performing ritual mating dances, and countless sea turtles gliding through the tunnels and underneath bridges, occasionally poking their little mouths up for a gulp of air. In fact, in the 10 minutes that we stand over just one of the tunnels, we see half a dozen turtles swim lazily by, a good omen for the snorkelling yet to come.

Walking further along the lava platforms, it doesn’t take long to spot a Blue-Footed Booby with a new baby, a surprisingly sizeable and extremely fuzzy white bird that looks nothing like its mother. In one of the best illustrations of “survival of the fittest” at work, Blue-Footed Boobies lay 3 eggs, usually several days apart, but typically only one baby bird will make it out of the nest weeks later, the smartest and strongest of the lot. Judging by the size of this baby and the lack of siblings nearby, it’s fair to conclude that we are looking at the sole survivor.

These bird are probably one of the best known species in the Galápagos, easily recognisable because of their bright blue feet, but also easily remembered by school children because of the somewhat amusing name. It’s only natural that they should be one of the animals we seek out during our time on the islands and, watching the curious dance and peculiar flapping of wings in front of us, I can see why everyone is so fascinated by Blue-Footed Boobies.

Finally, we hop back into the boat and struggle into our wetsuits for the main event, snorkelling through the lava tunnels. The captain has manoeuvred our boat to a slightly different, more exposed location and, when I hop in the water, I immediately notice the decreased visibility and wonder why on earth this spot is considered to be such good snorkelling if we can hardly see a few metres in front of us. But I don’t wonder for long.

Despite somewhat poor visibility, Los Tuneles is absolutely overflowing with marine life— sightings of rays, sea turtles, and reef sharks don’t stop for a single second of our hour in the water. At least a dozen White Tip Reef Sharks, each reaching a metre or more in length, swim along the bottom or rest inside caves just under the surface, and we actually see so many turtles that I lose count after the 20th.

We dive down to see colourful sea horses camouflaged into the coral, but my favourite of all are the rays. Gliding with small flutters of their wings, impossibly graceful creatures who seem always to swim in formation, huge flocks of Golden Rays and pairs of Spotted Eagle Rays fly past. There’s something so beautiful about their movements and I drive myself wild trying to get a photo or video that does justice to their elegance.

Back out of the water, cold but vibrating with excitement, I can now whole-heartedly confirm that this is the best day trip on Isla Isabela— and actually the best snorkelling I’ve ever done in my life. If your itinerary or budget allows for just one guided tour, you just have to make it this one.

A DAY TRIP TO ISLA BARTOLOMÉ, THE MOST PHOTOGENIC ISLAND IN THE GALÁPAGOS

What to do in Quito: 12 awesome things to do in Ecuador’s capital