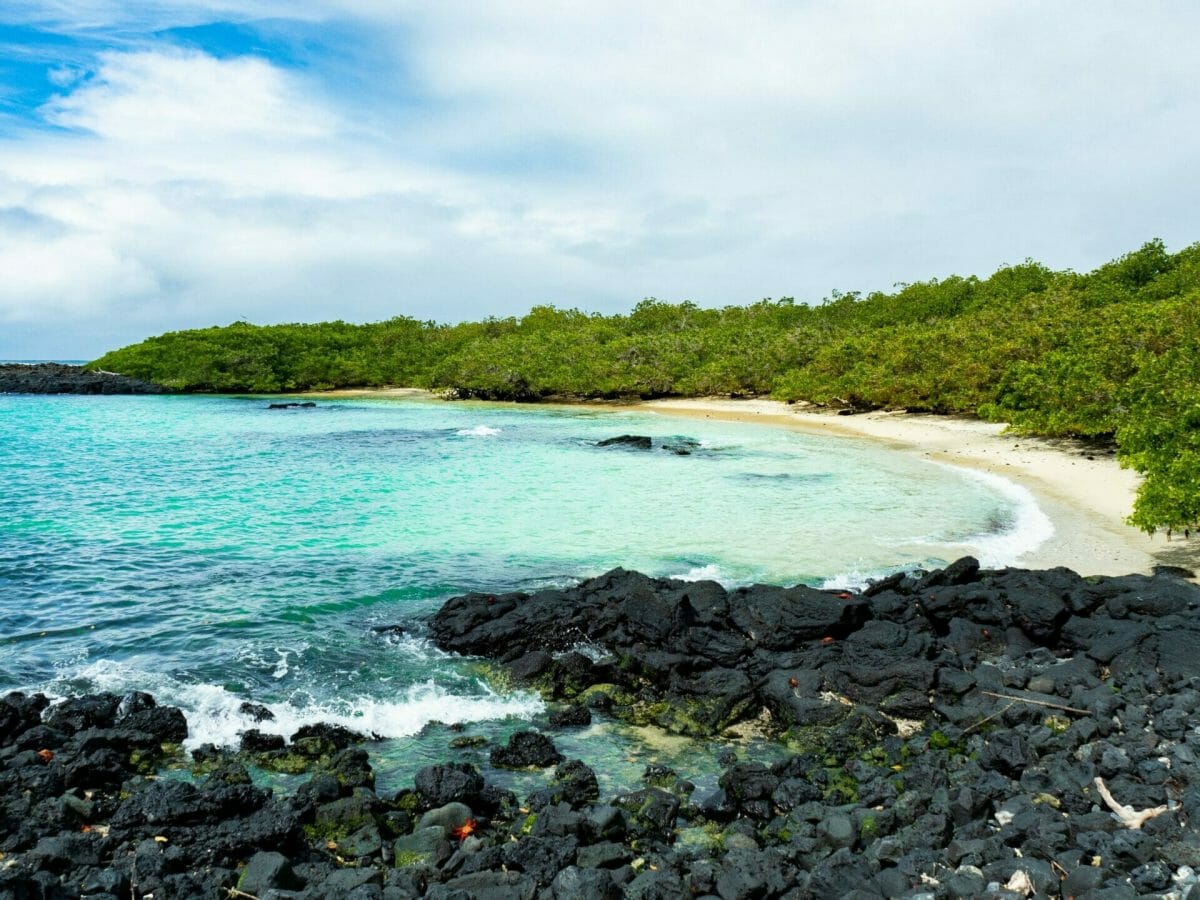 Among Isla Isabela’s many spectacular snorkelling spots, Las Tintoreras at the south end of the island is a real standout. Named for the White Tip Sharks who live here by the thousands, Las Tintoreras offers particularly interesting snorkelling through narrow channels in the lava, with hundreds of sharks swimming below, even more marine iguanas crowded onto the rocks above, and plenty of Galápagos Penguins, sea lions, Sally Lightfoot Crabs, and sea turtles scattered throughout the convoluted, volcanic landscape. Expectations were high following a great day in the water at Los Tuneles yesterday, but Las Tintoreras more than delivered, another phenomenal day tour in the Galápagos.

All the details: Snorkelling Tintoreras

Cost: Pahoehoe offers half-day (3hr) tours out to Las Tintoreras for $60USD, which includes a guided walk to see Marine Iguanas, White Tip Sharks, Galápagos Penguins, Sally Lightfoot Crabs, and Galápagos Sea Lions, followed by snorkelling through the islets to see sharks and turtles up close. If you have some flexibility or are travelling during shoulder or off-peak season (anytime not June, July, August, or December), you can book directly at the Pahoehoe office in Puerto Villamil when you arrive and it tends to be cheaper.

Getting there: The Pahoehoe office is located in the middle of Puerto Villamil, an easy walk from any accomodation in town. You’ll meet the tour group here and then be transported to the boat in a shared vehicle, and usually returned directly to your accommodation after the tour.

Where to stay: Hotel Star Fish offers incredibly comfortable rooms for around $65USD/night (for 2 people) in Puerto Villamil, an easy walk to anywhere in town including the Pahoehoe tour office and the ferry.

Top tips: Bring your iPhone or an SD card to the Pahoehoe office after your tour and the staff will transfer any photos taken on the day over to you. The guide usually takes photos for each traveller or group on the lava tunnels and shoots a GoPr during snorkelling, so if you don’t have an underwater camera, you can always grab some of their shots.

Back at the Pahoehoe office for another half-day snorkelling tour, mum and I wait for a few more travellers to join the group before piling into a car and riding a short distance down to the ferry dock. It’s an absolutely beautiful day, the sky reflecting off the glassy morning water to lend an intensely alluring tropical feel to the landscape. It’s enough to make me contemplate diving straight in (though I do resist, remembering how cold the water is).

Unlike yesterday’s longer trip out to Los Tuneles, it’s only about 15min from Puerto Villamil to Las Tintoreras Islet, but we still stop at a number of interesting locations along the way, including a beautiful beach where half a dozen Galápagos Sea Lions and their pups nap lazily on the shore or splash amusingly about in the water.

The black rocks ringing the beach are also alight with the vibrant red of little Sally Lightfoot Crabs, who dance around in the aquamarine sea foam and just generally do a terrible job of blending in. It really speaks to the lack of predators in the Galápagos that such brightly coloured crabs have been able to survive, a fair difference from the dull, nude-coloured crabs we see in Australia that seamlessly blend into the pale sand.

En route to Las Tintoreras, we are even lucky enough to spot several Galápagos Penguins “snorkelling” through the water in search of food. These are one of the tiniest and rarest of all penguin species, larger only than the Fairy Penguins that live in South Africa and off the coast of Melbourne. Galápagos Penguins are also the only penguin living in the northern hemisphere, and Las Tintoreras is known for being one of the best places in the entire Archipelago to swim with these adorable seabirds.

After admiring a number of other penguins perched on the jagged rocks, we eventually navigate to Las Tintoreras and scamper out onto the lava to explore the surrounds. We walk over jagged ground to one of the little channels, where the hot black rocks seem almost to fidget— but closer inspection reveals about a thousand marine iguanas just clinging to the sides of the channel, undulating like a single peculiar organism as each tries to find the perfect spot under the midday sun.

The guide superfluously explains that this is one of the main breeding grounds for iguanas in the Galápagos, a spot where even fewer predators than usual threaten their proliferation.

With a stoney appearance not unlike what I’d imagine a small dragon to look like, Marine Iguanas are endlessly fascinating and I’ve already photographed about 100 by this point, even more intrigued after watching a few flail gracelessly through the water like dark, angry snakes.

Despite all the commotion, though, Marine Iguanas are incredibly good swimmers, and the only lizard that has adapted to eat a marine diet. As I learned from watching a few minutes of a David Attenborough doco at the Pahoehoe office earlier this morning, Marine Iguanas can dive to 20m, holding their breath for up to an hour as they search for delicious algae on the ocean floor. It’s altogether haunting to imagine an iguana slithering past my scuba mask at 20m, but I’ll admit to being extremely impressed nonetheless.

It’s certainly unlike anything I’ve ever seen before, dozens and dozens of metre-long sharks piled next to and on top of each other— and by choice, no less. I don’t believe a reasonable explanation is ever offered for why the sharks do this, but we all stare transfixed for the better part of a half hour, trying fruitlessly to think why these sharks might want to pig-pile in a lava channel rather than napping in a more spacious spot. Suggestions are welcome.

And with that, it’s off to the water. We move slightly offshore in our boat and then, inelegantly crammed into our wetsuits, dive below the surface for the main event that we’d sort of forgotten all about in this morning’s excitement.

Sea turtles guide us over to the mouth of the lava channels, perhaps one of the most interesting settings I can imagine for a snorkel, and we drift slowly through, trying not to brush the rough walls or disturb the many sharks below us.

Snorkelling with turtles in the Galápagos

Unfortunately the photos and videos don’t really do it justice, an experience I can only liken to swimming through shark soup, but suffice to say that it is one of my favourite things we do in the Galápagos, a day I won’t soon forget.

A DAY TRIP TO ISLA BARTOLOMÉ, THE MOST PHOTOGENIC ISLAND IN THE GALÁPAGOS

Getting a Brazilian visa in Puerto Iguazú, Argentina