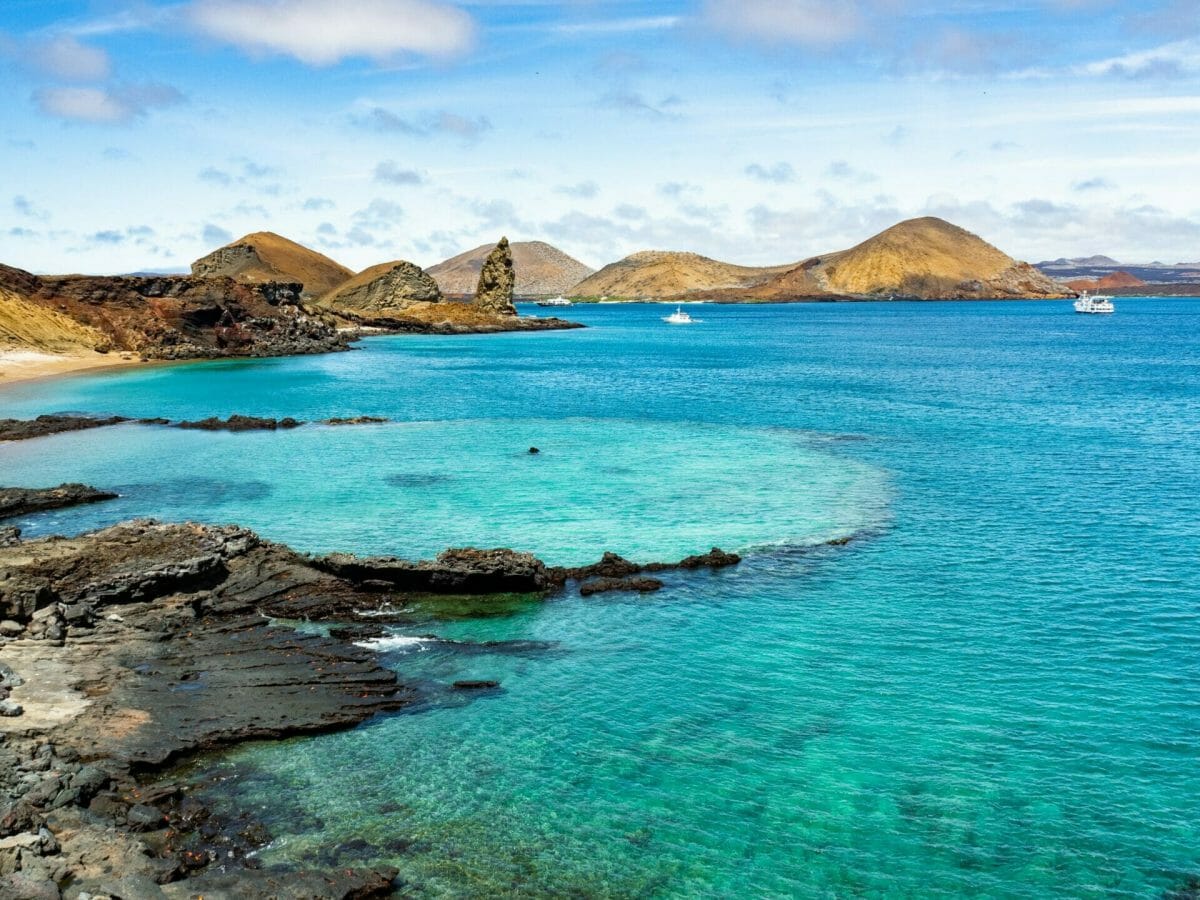 A day trip to Isla Bartolomé, the most photogenic island in the Galápagos

Said to be the most visited island in the Galápagos, Isla Bartolomé is a barren and small but intensely striking island located just north of Santa Cruz. It’s not possible to stay on the island overnight and all visitors must be accompanied by a guide, but even a day tour out to Bartolomé is a guaranteed highlight of your time in the Galápagos, offering colourful volcanic vistas, world-class snorkelling at Pinnacle Rock, and the chance to see everything from tiny Galápagos Penguins and Sally Lightfoot Crabs to Whitetip Sharks and rays.

Cost: A full day tour from Puerto Ayora to Isla Bartolomé is a whopping $255USD when booked with Yacht Santa Fe. The day includes all transport from town to the yacht and then the journey to Bartolomé, as well as breakfast and lunch, a walking tour on the island, and snorkelling at Pinnacle Rock. It’s expensive, but so worth it!

Getting there: Any tour provider, including Yacht Santa Fe, will pick you up from a hotel in Puerto Ayora and drive you out to the Itabaca Canal to meet the boat.

Where to stay: Hostal Sueños Silvestres has basic but very comfortable rooms ($80USD for a double with private bathroom) just 2 blocks back from the main street in Puerto Ayora. The staff is incredibly friendly, but they don’t speak any English, so be sure to brush up on your Spanish before staying.

Top tips: If you’re travelling during shoulder/off-peak season (not June-Aug or Dec-Jan), if you have some flexibility in your schedule, OR if you’re willing to risk not getting to see Bartolomé, you can find day trips much cheaper by waiting to book until you arrive in Puerto Ayora. Walk into any of the tour agencies lining the main street (Avenida Charles Darwin) and ask what day they have boats going to Bartolomé.

Retrieved from the front of our hotel in Puerto Ayora just after 6am and driven across the muggy highlands that seem always to be experiencing their own private wet season independent of the rest of the island, mum and I board a yacht for our first day tour in the Galápagos.

As our vessel cruises north towards little Bartolomé, we sit down to a hot breakfast with the dozen or so other passengers on board, enjoying tea or coffee, eggs, cheese, and breads & spreads over pleasant conversation with an older German couple across the table. Everyone appears equally excited for the day’s activities, abuzz with nervous energy as we imagine what peculiar plants and unique animals await at our destination.

Isla Bartolomé, named for one of the surveyors aboard Charles Darwin’s historic HMS Beagle expedition around South America (well, really around the world), is probably the most recognisable of all 21 islands in the Galápagos Archipelago.

As I was doing my research for this trip, one image in particular captured my attention, a shot overlooking a wildly vibrant landscape of lava painted in a million shades of yellow and orange, great swirls of golden sand bookending either side of the narrow island, and volcanos rising in the background, all surrounded by impossibly blue water. The picture didn’t even seem real, more like an artist’s rendition of a place too fantastic for this world.

As we disembark and begin our walk up 600 wooden steps to the viewpoint, even as I’m surrounded by the same cerulean water I saw in the photo and confronted with plenty of weird and wonderful textures, I’m still wondering what we will see from the top. However beautiful the scenery may be, surely it can’t be that spectacular. And yet— it is.

Looking across the island and down at Pinnacle Rock below, it’s not difficult to see why this island is the most popular day trip in the Galápagos, or why visitors rave about the beauty of its volcanic slopes. There’s truly nothing else like these paradoxical landscapes, so dry and desolate and yet bursting with life and colour.

On the way back down to the water, grinning ear to ear, I listen as our naturalist guide points out fascinating species of hairy cactus, lava rocks that seem to shimmer like oil slicks in the sunlight, and bright red crabs dancing erratically along the rocks. As far as introductions go, I’d say Bartolomé has made a pretty spectacular first impression.

We’re only back at the boat long enough to wolf down a quick lunch and snap on snorkels before the second half of the day’s activities begin. One of the most distinct landmarks on the island is Pinnacle Rock, a sharp volcanic cone formed by rapidly-cooled lava from an underwater volcano, which is also said to be one of the best snorkelling sites in the Galápagos, an area bursting with marine life and abustle with activity.

Although we are lucky enough to spot a large number of Galápagos Penguins snorkelling through the water in search of food, a rare occurrence in other locations but actually rather common on Bartolomé thanks to the breeding colony at Pinnacle Rock, we don’t see a great deal more than a few turtles and an enormous quantity of colourful fish as we swim through the water.

Mum and I are far from discouraged, though, and by the time we wash up on the sandy beach and spit our snorkels out, we are exhausted, but in the best, most content kind of way.