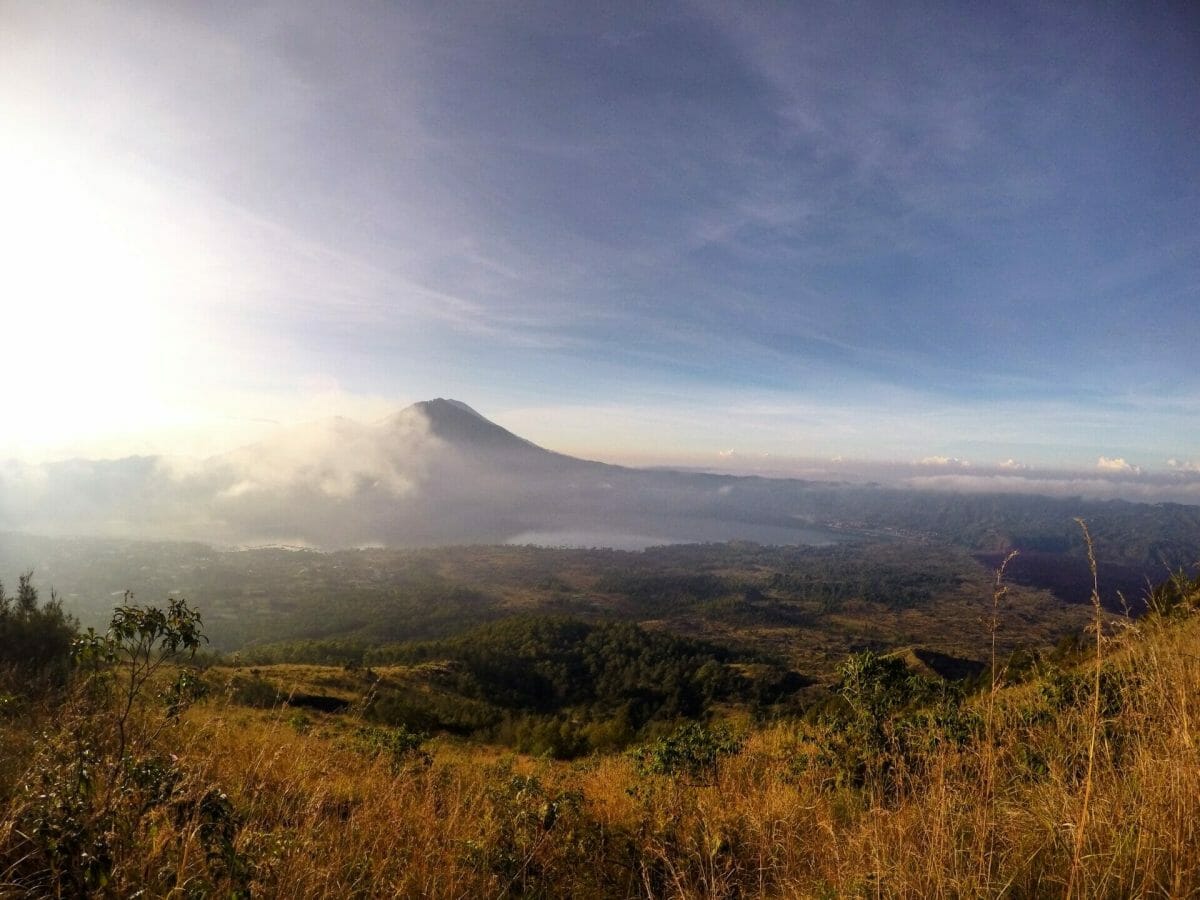 For Callum’s birthday, I lovingly booked a fun trip that would include a trek up an active volcano, Mount Batur, and white water rafting. Then, of course, I got violently ill 1 hour before we were scheduled to be picked up and we were forced to cancel with no refund. Obviously, I feel cripplingly guilty about ruining his birthday present, so we decide to take ourselves to the volcano on our motorbike for the sunrise hike.

This involves waking up at 1130pm and hopping on the scooter at midnight for a 3 hour drive in the dark to the northern part of the island. With our offline maps, we make it there relatively easily and even run into a group of Filipino travelers who are doing the same thing. Around 3am, we reach the HQ for the trekking guides.

All the details: Mount Batur hike

Cost: There should be no costs associated with a DIY hike out Mount Batur, as the trail is fairly obvious and the hike isn’t strenuous enough to require any outside assistance, but the guides at the base of the volcano will harass and pressure you so much that it’s easier to just pay the Rp200,000/person for a private guides. A tour, including transport from the other side of the island, will run around Rp800,000/person.

Getting there: It is possible to ride your scooter 3 hours across the island in the middle of the night and “DIY” the hike of Mount Batur, but the best (and safest) way to get there is definitely via car with an organised tour.

Length of walk: Depending on your fitness level, the hike from base to summit will only take 1.5-2 hours.

Difficulty: The walk is moderately steep, but it’s not very long and it’s unlikely that you’ll be carrying much weight, so anyone of average fitness should be able to tackle this hike.

Best time to hike: Almost everyone does this hike for sunrise, so aim to arrive at the base of the volcano around 4am (depending on time of year and your hiking speed) to catch first light from the top of the crater.

I had read in other travel blogs that you really don’t need a guide, but would be relentlessly harassed if you don’t take one. I would have to agree entirely, as the hike was quite straightforward, plus there are people coming through every few minutes, so it would be hard to get lost. However, we tried to avoid getting a guide and it was immediately obvious that they were not going to let this happen. Look, I absolutely hate this just on principle, but give in and get a guide, don’t ruin your hike by getting into fights with the locals.

But know your stuff and don’t be taken advantage of! Our Airbnb hosts told us to expect to pay Rp200,000/person and so we knew immediately that something was fishy when the guides were telling us it was Rp600,000/person. We did eventually get them down to 200k through some clever bargaining, and probably could have gotten them lower if Callum wasn’t so insistent on getting breakfast included (which ended up being banana on bread, but more on this in a minute).

We parked our scooter under a tree near the guide centre, but no more than 20min into the hike, Callum realises he doesn’t have the key and fully flips out. We walk all the way back with the guide, scanning the dirt with flashlights, but no luck. We look all around the bike, ask the other guides at the HQ, and even start walking back up the mountain to look again, but no luck and Cal is hysterical at this point. As a last-ditch effort, we empty out my backpack, but still can’t find anything. And then suddenly, the guide points under Callum’s shoe and there it is. To this day, it is still a mystery where this key came from, if it was always in the dirt or fell out of my bag or if it just magically appeared.. We will never know.

After the horrible key incident, Callum calms down and we carry on our trek. It is definitely steep, but the whole thing doesn’t take longer than an hour or two (don’t have a great grasp of time, as it is pitch black the whole time). So long as we are moving, we are really hot, but the wind gets increasingly cold and howling as we get higher on the mountain, so I do wish I had worn pants… Despite the key delays, we are still one of the first groups on the mountain, giving the illusion that it isn’t very crowded up there, though this later proves untrue. It’s sometime around 5am at this point and we still have another 90min at least before sunrise, so we try to huddle together and sleep.

Our guide eventually comes over to bring us the “breakfast” that Callum bargained so aggressively for: literally slices of banana in white bread. What even is this.. We did bring snacks, so we end up eating some crackers, but our guide is right next to us, so we force ourselves to eat the breakfast and make quite a show of acting like we enjoy it. We are way over tired and the whole thing is bringing us to tears of laughter. I eventually chuck some of the sandwich casually behind me for the stray dogs because I simply can’t eat another bite.

Finally, the sun starts to come up and right at that second, fog rolls in and obscures the entire mountain view. Despite hopes that it may clear, it actually doesn’t until we are walking back down and the sun is fully up. We are a bit annoyed, given the effort that it took to get here. But the view does make up for it in the end, even if we are too tired to fully enjoy it at the time.

Read more about our travels around Bali

A BALINESE BIRTHDAY FOR CAL