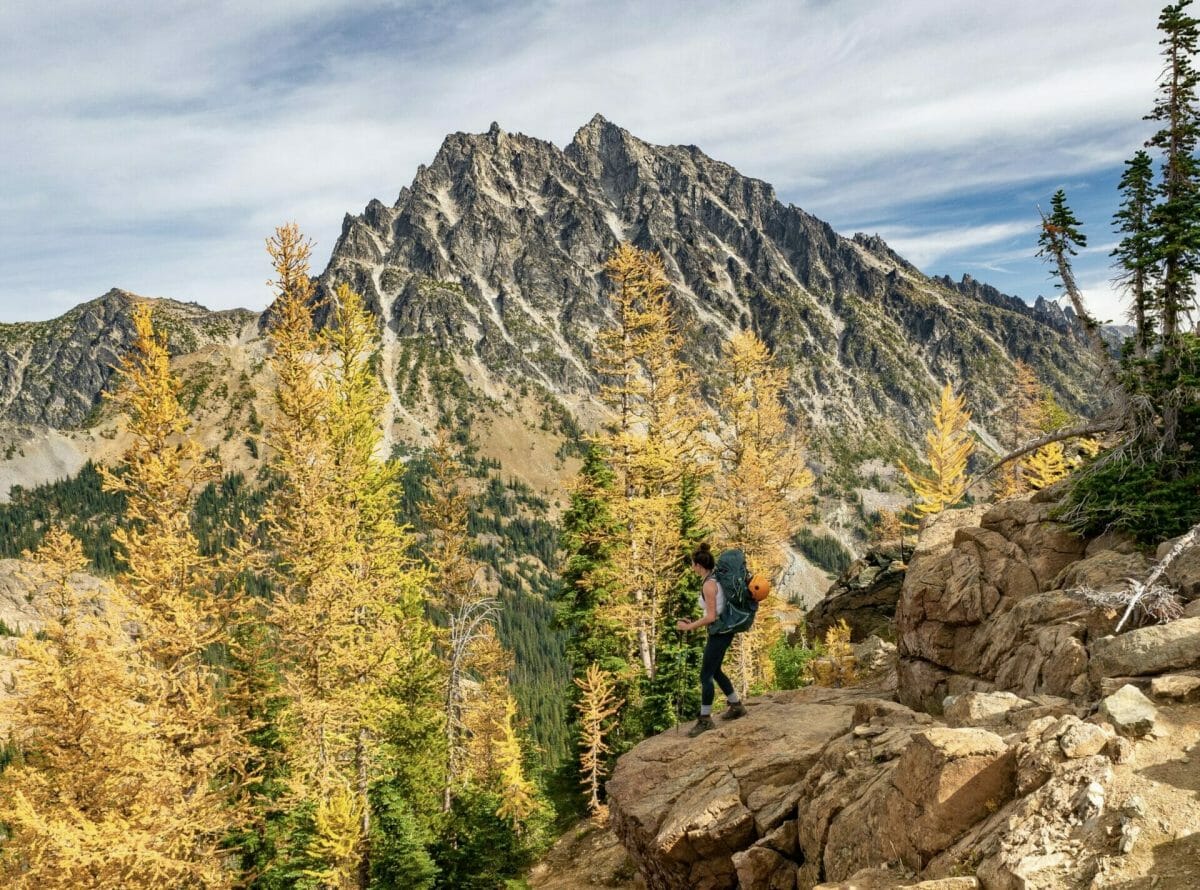 Alpine Lakes Wilderness never fails to impress, particularly during the magic of mid-autumn when all the leaves have turned varying shades of orange and the larches glow an otherworldly gold. And just as promised, this protected area within the Okanogan-Wenatchee National Forest is a mecca of alpine lakes, each more spectacular than the last.

In an effort to escape the dismal, rainy weather forecasted across the western side of the state this weekend, dad, Eileen, and I head over to the Leavenworth area on Friday morning in the hopes of clear skies and good views in the Alpine Lakes. We certainly find both en route to spectacular Ingalls Lake, and even more excitement on our summit of nearby South Ingalls Peak.

Drive about 1hr from Cle Elum (or 2.5hrs from Seattle)

Moderate, considering the 1,286m elevation gain to the pass and Ingalls Lake, but still relatively short and reasonable for any fit hiker; Ingalls Peak is an easy Class 2-3 scramble, but the rocks are really unstable and slippery.

There are a few creeks and springs en route to the lake where you’d be able to fill up water, but best to bring a filter

Hike to Ingalls Lake without tackling the peak as a short day-hike; if you do want to camp, there are heaps of sites between the pass and the lake (but camping at the lake itself is not allowed)

Although the number of cars overflowing from the Ingalls Lake lot this morning is nearly enough to warrant a plan b (and we do seriously consider other options on the drive in), we end up finding a spot directly in front of the trailhead that’s simply too good to pass up. If we’re fated to hike to Ingalls Lake today, this is as good a sign as any.

We set off from the car around 1030am and head upwards along a gradual, well-maintained trail. To our left, Esmeralda Peak dominates the view, its dark metamorphic slopes a stark contrast to the red peridotite of Ingalls Peaks above us.

The curious blend of rocks within the area is part of what draws hikers and outdoor enthusiasts to Ingalls Lake, situated in a rocky red basin beneath the striking grey granite of Mt Stuart. Dad quickly proclaims this as one of the top 10 most famous alpine lakes in Washington, so expectations are high this morning.

Eileen leaves us behind and hustles towards the pass, but dad and I climb leisurely towards the high point, stopping to chat to a couple of passing botanists about the unique flora growing on the rocky hillside.

The Shasta Fern in particular catches my attention, growing almost like a little cactus out from under rocks or around the side of boulders. This is one of the only places you’ll find these ferns, which are hugely prolific around Ingalls Peaks due to the unique mineral composition of soil under peridotite rock. Between the hardy succulents and the red mountains, you’d swear we’re in the Southwest— as we will be in 2 short weeks!

It takes just over 90min of steady uphill climbing to reach the visible high point, cresting over an unassuming mountain pass to a staggering view of the infamous Mt Stuart framed by golden larches.

I’m suitably impressed, and even more so as dad identifies Ingalls Peaks to the left. We are planning to climb the southernmost peak today, a relatively easy scramble upwards from Ingalls Lake that should afford sweeping views in all directions. And to think, we haven’t even seen the lake yet!

After enjoying a windy lunch break atop the pass, we continue downwards via Headlight Basin on the lower trail to Ingalls Lake, hoping to set up camp somewhere along the way.

Shortly after, we discover a perfect rocky perch right in front of Mt Stuart, pitch our tent, and then roll back out for the rest of the walk to the lake.

Slipping and scrambling along a somewhat sketchy path, we arrive at Ingalls Lake 40min later and are greeted by an even more spectacular view of Mt Stuart behind the deep blue water. The lake is certainly unique, sitting in a basin of orange peridotite, hence its insane popularity— easily reflected by the several dozen people scattered along the shore.

Still, it doesn’t feel overly crowded and we’re easily able to find a little rock perch from which to enjoy the scenery on this sunny afternoon. My only regret is that we don’t have time to stop and swim!

Heading upwards again, aiming for the saddle between North and South Ingalls Peaks, we leave all of the day-hikers behind to rise high above the lake. The view is suitably staggering, but the route proves a bit more elusive.

We scramble over boulders and hop between rocks towards the summit, but more than a few of the usually sand-paper-rough rocks have been polished down to glass and, as you can imagine, it doesn’t facilitate easy climbing. There are a few slips and trips that set even my usually oblivious heart racing, so I’m glad to finally ditch our trekking poles and proceed with all hands and feet engaged..

After several consultations with the GPS and more than a few instances of backtracking to find a better route, we finally get through the rock scrambling and just walk along a little gravel path to the summit, 1.5hrs after leaving the lake and 2.25hrs from camp. Even with clouds beginning to gather in the distance, we whirl around admiring all the mountains surrounding our highpoint.

Not long after, we are driven down by wind—but the descent back to the lake proves far more challenging than anticipated. All of the polished, marble rocks that were slippery and somewhat irritating on the way up are an actual death trap on the way down, threatening to send us sliding right off the mountain. At one stage, I sit to slide down a particularly steep and slick boulder, but gain so much momentum with my shiny tights that I would have gone straight over the edge if not for dad standing in my path.

Somehow, we emerge unscathed (just a little shook up), and I silently vow to be a lot more considered in my movements, lest my limp corpse end up in the lake below. The return to camp is slower than expected for all the slipping and route finding, but eventually we do make it back to the lake in one piece.

From here, we follow the high trail back towards our camp, hoping to save time by avoiding the drop into Headlight Basin.

Naturally, our well-intentioned shortcut is about 3x longer than the lower trail that we so desperately wanted to avoid, so we arrive back to camp in complete dark, ravenous but thankfully not too cold. After wolfing down some food, we triple checking the staking on the tent and try to get a bit of sleep before the storm rolls in later tonight.

Around midnight, right on schedule, we are hit with an insane blizzard that threatens to either lift our entire tent off the rock or shred the fly and snap the poles with us laying somewhat helplessly inside. We spend at least half the night holding up the front of the tent against the wind, which is so insanely loud that you can’t possibly sleep through the worst gusts, yet somehow we are still toasty inside our 3-man tent.

I can’t help but laugh at our choice of campsite, out on a rock not sheltered by a single tree—we just had to have that view of Mt Stuart, but of course it was dark when we got back from our climb yesterday and by morning the view is entirely obstructed by snow. It may have been a bit wiser to choose a spot in the trees, after all.. still, at least I’m not in my rickety little 1-man tent!

By some miracle, we survive the night and wake to a snowy wonderland outside, wind still blowing thick flakes sideways and drenching everything in sight. It makes our 1.5hr return to the car a little more interesting, but by 11am we are stripping off rain gear, bundling into down jackets, and leaving the (surprisingly crowded) trailhead behind. Blizzard and all, it’s been an incredibly successful outing to another of Washington’s most scenic regions!