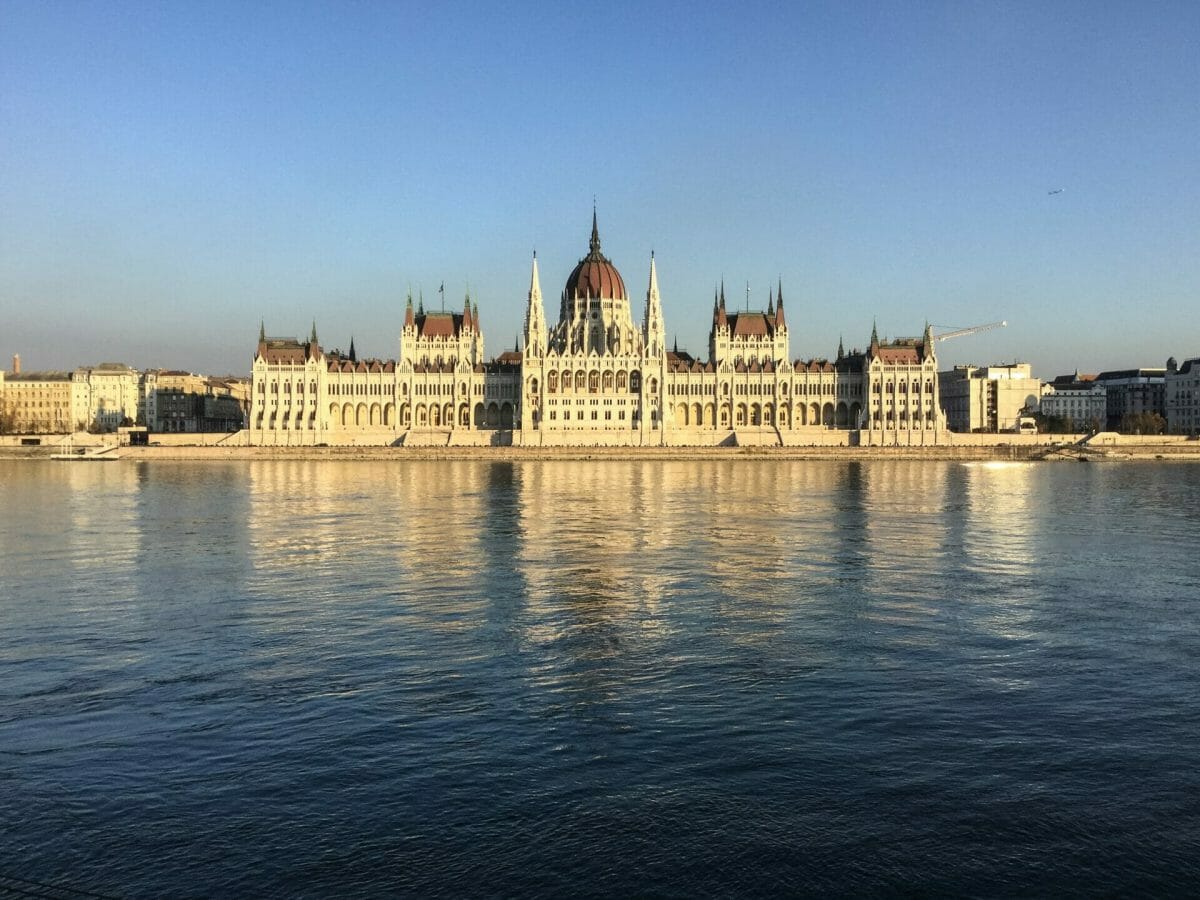 Hungary for the holidays: the best Budapest experiences

After only a few days in Hungary’s wonderful capital, I can conclusively say that I absolutely love Budapest. It has really stolen my heart, and I think that the beauty and magic of the city is only compounded by the contagious holiday spirit floating around. It’s cold, trees are lit up, everyone and their cousin is selling mulled wine and kürtőskalács (the best dessert of all time), the lights along the river look marvellously festive, and, most importantly, Christmas Markets (!!). It’s hard to imagine visiting any other time of the year! Here are my 6 favourite ways to enjoy Budapest around the holidays.

Take in views from Fisherman’s Bastion

For sweeping (and free) views of the city, head to this awesome lookout point in Buda, just walking distance from M2 station at Batthyány tér. The bastion was built back in the early 1900s and apparently much of it was specifically designed to offer views of the city for residents. Matthias Church, sitting just in front of the Bastion, is absolutely spectacular, as well! Cal reckons Budapest even beats out Paris in terms of most beautiful cityscape, and I think I may have to agree.

So we decided to be fancy and go on a dinner cruise, which I thoroughly recommend to anyone wanting to see all the beautiful buildings along the river at night, especially during winter since it’s dead cold outside. Student tickets were 14200huf and adult tickets only a bit more for the 7pm dinner cruise that lasted 2 hours; we booked through a tourist information office.

It was probably one of the fancier experiences of my life, which is great considering it was only $30 each. I justified this splurge because we hadn’t eaten since breakfast and got to gorge ourselves on Hungarian specialties at the marvellous buffet, plus we got several glasses of wine, and already that’s half the ticket price used up to have dinner on land at a restaurant. Then you throw in the great vantage point to see several dozen important landmarks on the Danube, all lit up beautifully at night, over 2 hours of boat fun.. It practically pays for itself.

Splash around in Szechenyi Thermal Bath

We couldn’t visit Budapest and not visit a bath, so we spent several hours lolling around in the hot water at Szechenyi baths in the City Park. It’s not the cheapest attraction at 4700huf ($20AUD), plus another 1000huf for the towel hire (and the 2000huf deposit that is returned to you when you leave), but it is super fun. And the hot water is really good on a freezing winter day, except for getting out into the cold air. We are cheap and only hired one towel, so of course princess Callum got it and I had to run back to the locker room in 2C in my bikini, but no matter. Builds character.

Stroll around and take in the sights

We spent a few afternoons just wandering about the city and ogling all the impressive buildings and towering castles. Some favourites include: St. Stephen’s Basilica, particularly when it’s all lit up at night like a giant candelabra; Hungarian Parliament, perching on the bank of the Danube and probably the most beautiful government building I’ve ever seen; Hősök tere, a square near City Park featuring such exciting statues as “Seven Chieftains of the Magyars”; and Vajdahunyad Castle, a particularly picturesque castle also located in City Park.

Be festive at the Budapest Christmas Market

The undeniable highlight of winter in Europe is the holiday markets and Budapest has a huge one in Vörösmarty Tér (easily accessible by the metro stop of the same name) that is fantastic. Definitely heaps bigger than the market we visited in Vienna, this market has stalls on stalls on stalls selling Christmas ornaments, art, china, leather goods, fur hats and gloves, soaps.. the list goes on. I would have bought heaps more if I wasn’t so low on Hungarian forints and not wanting to change more euros over.

The holiday atmosphere was absolutely amazing, with decorated Christmas trees and lights all over the square and holiday classics playing over the speakers. Not to mention dozens of food stalls selling the most delicious winter food and drink, like mulled wine (mulled wine!!!) and hot cocoa and goulash in bread bowls and bratwurst..

Who knew it was so delicious!? Definitely a top experience of being in Budapest was enjoying the local food, which was all the more inviting in the cold weather. Firstly, and probably most importantly, kürtőskalács. They roll dough into a long snake and twirl it around what looks like a rolling pin and then set it on some sort of rotisserie over a fire. The result is a spiral donut in the shape of a chimney that is hot and crisp on the outside and doughy as all get out on the inside, basically nothing short of heaven on earth.

And then the platter-sized potato pancakes topped with sour cream, cheese, onion, and this amazing chicken. The beef goulash served in bread bowls and bratwurst overflowing with toppings and pork straight off the spit… drooling. Then add in hot chocolate, a dozen varieties of hot spiked punch, apple cider, and—the ultimate—mulled wine. Hungarian food was some of the best we’ve had so far and my belly was certainly sad to move on.

Read more from our Europe trip

OMG, WE SAW THE QUEEN OF ENGLAND

AUTUMN IN THE CITY OF LIGHTS: OUR FAVOURITE PARIS EXPERIENCES

IT’S BEGINNING TO LOOK A LOT LIKE CHRISTMAS IN VIENNA

COUNTING DOWN TO CHRISTMAS IN WROCŁAW, POLAND

PLANNING A TRIP TO POLAND

Counting down to Christmas in Wrocław, Poland