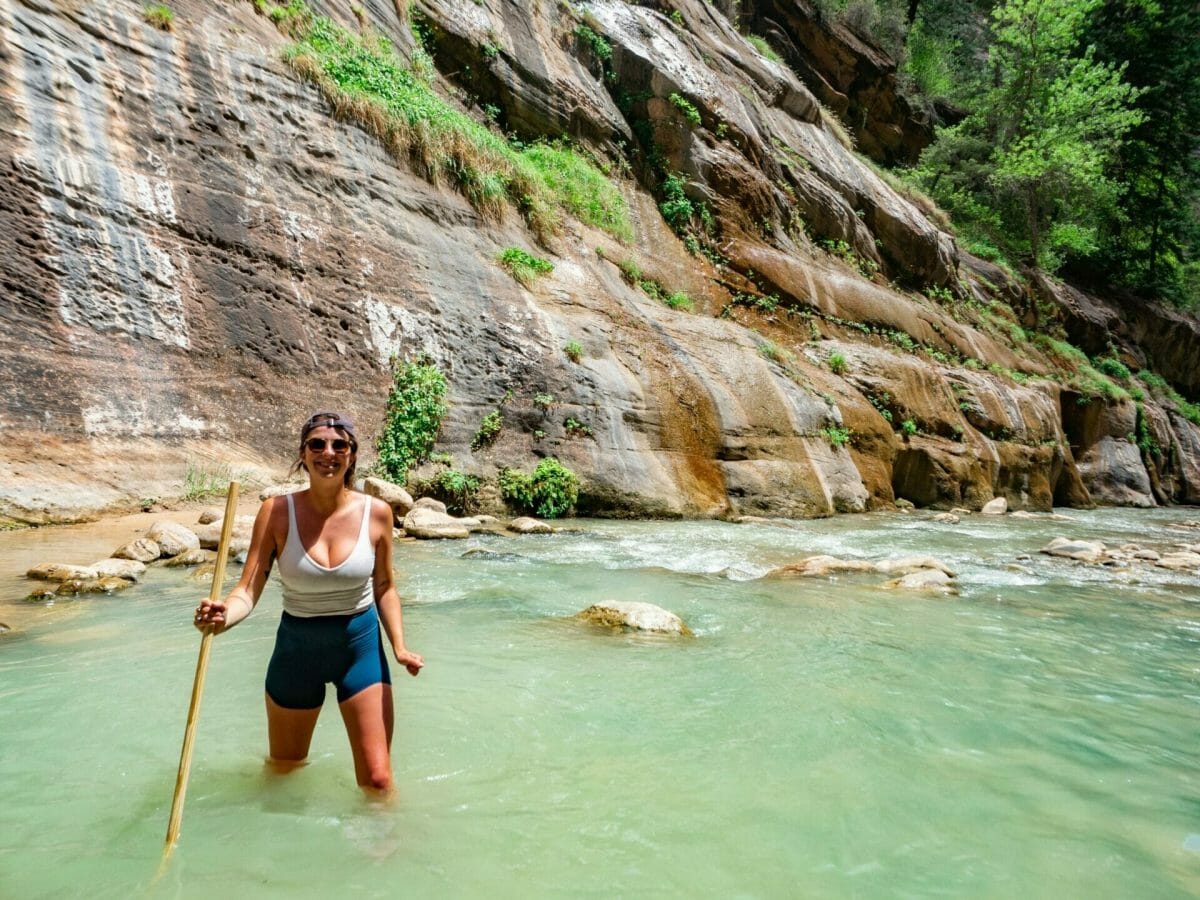 After several zigzagging border crossings last week, we finally left Arizona behind and crossed into Utah to continue exploring Zion National Park. This is one of our absolute favourite places in the southwest, but it’s also everyone else’s, so the week was largely dictated by permit availability and impossible-to-obtain shuttle tickets. In the end, though, it all worked out better than we could have hoped!

Following a sleepless night in my tent on a spectacular rock perch at Cape Final (worth it!), I returned to the van and we set off back towards Zion National Park in southern Utah. We’d already spent one day hiking here last week, and actually had several more planned, but were foiled by the Subway permit lottery time and time again.

This week, we were back to give it yet another try, now armed with more information.

We spent our first day at Lambs Knoll, mere feet outside the park boundary, climbing with an awesome guide from Rock Odysseys.

Getting to explore this local-favourite climbing area was a massive treat, as was the opportunity to work on some of our climbing skills with a professional, and we had a fantastic afternoon hanging out on the rock.

Read more: AN EPIC AFTERNOON OF CLIMBING AT LAMBS KNOLL WITH ROCK ODYSSEYS

After losing the online lottery for the Subway, an amazing Canyon within Zion that we could access on a challenging but non-technical hike, FIVE times— we decided the only move forward was to try and get a walk-up permit. None are actually set aside for this purpose, so we had to cross our fingers that there would be a cancellation or decrease in group size, and that we’d be the first ones there to claim the newly available permit.

And so, Dan woke up around 5am the following morning to drive us into the park under the cover of darkness. We had no trouble parking at Zion around 6am, and soon after Dan left to go wait in line at the permit office, which opened at 7am.

When he returned an hour later, it was with a massive smile and a permit in hand— the girls just behind him in line were decreasing the group size on their permit since some friends couldn’t make it, and he let them in front so we could snag 2 of the newly-available spots!

Considering how many times we’d tried and failed to get this permit, we couldn’t be happier to be heading out to the Subway that day!

The hike began with a steep, rocky descent to the Left Fork of North Creek, and then followed the water for several miles towards the canyon. We’d deliberated about wearing canyoneering shoes, but were ultimately so glad we had, now able to traipse back and forth across the river (and often just walk directly through the river when the trail was unappealing).

After several hours of slow-going, stopping constantly to admire wildflowers that lined the riverbank, gold-coloured frogs that covered the rocks, and dozens of babbling waterfalls, we finally arrived at the Subway itself.

True to its name, the cylindrical slot Canyon bore a striking resemblance to a subway tunnel— and with wind rushing through, it even felt a bit like waiting for an underground train.

As we arrived, a group of canyoneers were just rappelling into the canyon and sliding into the dark pools of water, having the time of their lives. Despite the freezing wind that had started to blow through (and the fact that they were all in wet suits while I was in shorts and a tank top), the temptation was simply too great.

It ended up being an awesome swim through the rocks to a hidden waterfall at the back of the canyon (details of which I had to describe to Dan, because he refused to get in).

The journey back was every bit as fun as our inbound hike, and we passed out that night incredibly satisfied for having FINALLY experienced the Subway.

Read more: EVERYTHING YOU NEED TO KNOW ABOUT HIKING THE SUBWAY (BOTTOM UP) IN ZION NATIONAL PARK

The only bad news clouding our otherwise perfect day was that we’d missed out on Zion shuttle tickets for the next day, which were released at 5pm and completely exhausted by 5.05pm.

This somewhat complicated our plans to hike the Narrows, but in the end, we hired bikes and rode over an hour out to the Temple of Sinawava— and it was actually the BEST way to experience the scenery of Zion Canyon (infinitely better than a crowded shuttle bus).

The Narrows is one of Zion’s most popular hikes (if not the MOST popular) and for good reason. The hike itself is absolutely beautiful, with towering canyon walls narrowing over the crisp Virgin River until almost no sunlight passes through— but the appeal is equally due to the novelty of walking through water the entire time. It’s like no other hike I’ve ever experienced, and I was immediately enthralled.

Dan had previously done the Narrows and was fairly concerned over how my ankle would fare, but with our grippy canyoneering boots, it was surprisingly easy to walk over what another hiker described as “greased bowling balls” in a flowing river.

After 2.5hrs, we reached a fork in the canyon, and continued right to explore the tighter walls and more interesting terrain of Orderville Canyon.

Most people continue through the main canyon, where the scenery remains more or less the same, so we were pleased to see the crowds thin dramatically as we continued deeper into Orderville. This side of the hike is also far more interesting and adventurous, breaking up the river walk with large boulders that you need to scramble over to continue onwards.

With more time, we easily could have spent hours in Orderville Canyon alone, but were eventually driven back by thoughts of the bike ride that awaited us.

Although insane wind gusts threatened to knock me completely off my bike on several occasions and we had to keep stopping for Dan to fix his chain, we were very pleased to NOT be taking the shuttle back— the line was hundreds of people long and we actually made it back quicker than those who had to queue up!

By the end of the week, we were over the mayhem of Zion proper (where the car park fills by 7.30am every day and the shuttle is literally impossible to get tickets for), so we spent the next couple days hiking on the eerily quiet west side of the park, near Kolob Canyons.

This side of Zion is no less remarkable than Zion Canyon, yet it receives a tiny fraction of the visitors— you can hike for hours over here without seeing a single other person, something that you can’t even do for seconds on popular trails like Angel’s Landing and the Narrows.

During our time in Kolob, we summited Northgate Peak East and tackled a surprisingly challenging 14.5mi hike through deep sand on Hop Valley Trail to reach Kolob Arch, the second largest natural rock arch in the world.

Both trails were insanely beautiful, overflowing with wildflowers, and completely devoid of people. It’s not an experience I ever thought I’d have in Zion considering how popular it’s become, but this is backcountry exploration at its best!

As per usual, we spent the majority of our week in awesome (free!) BLM and Forest Service campsites, but by Sunday, we were long overdue for a rest, an indoor shower, and some work time, so we checked into a hotel in St George and recuperated over takeout and several hot showers.

Enjoying a host of activities that required pricey rental gear (and paying for some upcoming tours next week), we exploded beyond our usual budget this week within the “activities” category— but I wouldn’t change a single thing, expensive or not!

Driving the Road to Hana: recommendations for your Maui road trip