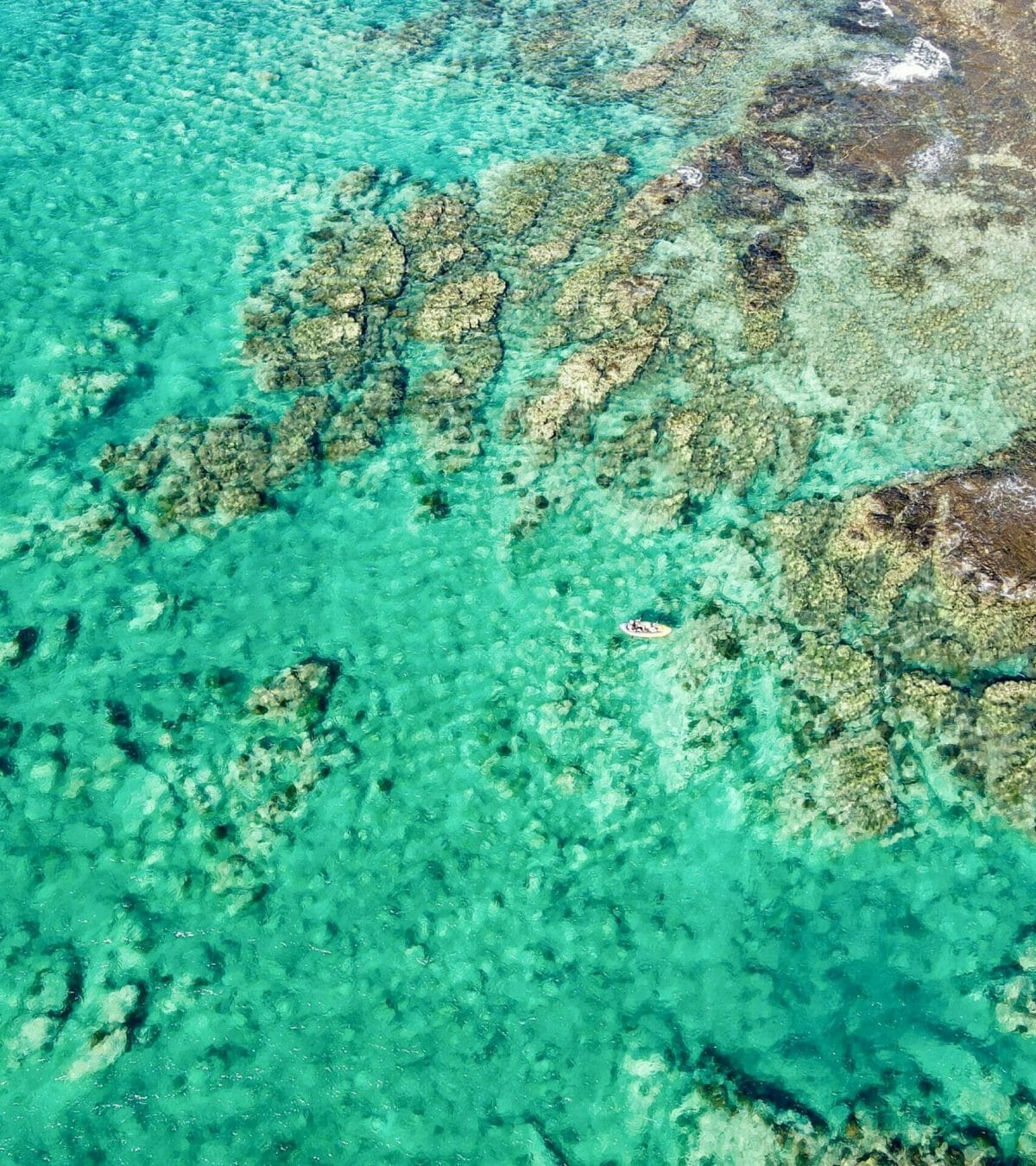 Starting off with a visit to the only place I’d ever been in Baja before (and a big part of why I pushed so hard to bring the van down here in the first place— charming little La Ventana), this was an incredibly full week of kayaking and snorkelling in Cabo Pulmo National Park on the East Cape. If we were impressed by the marine life in Baja before, we were simply blown away by what we discovered in Cabo Pulmo, a true gem of the peninsula.

Although La Ventana is regarded as one of the top kitesurfing destinations in the world, there’s so much more to this small fishing village on the Sea of Cortez than just consistent wind.

I spent several weeks here at the start of the year, tagging along on a friend’s kite trip, and without ever getting on a board myself (unco to the extreme, what can I say), I totally fell in love with the unpretentious beauty and easy living of La Ventana.

I hitchhiked up and down the single dirt road, riding barefoot in the back of pick-ups or hopping into the cab with friendly locals who chatted to me even through my broken Spanish; swam in chilly waters beneath hundreds of colourful kites; drank margaritas in a hammock on the beach; and settled into effortless friendship with well-travelled kiters who, like me, were just chasing adventure and a life outside.

Despite the massive seasonal gringo population, the town itself has retained a distinctly Mexican feel and I’ve had some of my favourite meals at small roadside taco stands here— Rancho La Ventana and Taqueria Paty were the two I most wanted to revisit with Dan!

We didn’t have weeks to devote to La Ventana on this trip, instead hoping to spend our remaining time snorkelling farther south, but I was incredibly excited to show Dan the unpolished, oft-overlooked Baja town that had first stolen my heart.

The added bonus was running into another van couple that we’d first met in the Trader Joe’s parking lot in Sante Fe, New Mexico, who were now down in La Ventana for the kiting season! Allie and Dan even brought us back to their place for a hot shower, which we certainly needed, but it was most wonderful catching up with the kind of new friends that instantly feel like old ones.

After checking out my favourite fish taco spot in La Ventana, we drove down the road to the primitive tidal hot springs that sit right on the ocean’s edge. With cups full of cold cocktails, we settled into a pool that was already perfectly constructed and watched as the sun went down over the mountains.

There’s some magic here, and contrary to what dismissive bloggers or travellers who’ve never set foot in the town themselves would have you believe… it’s not reserved only for kiters!

One of the most surprising recommendation of the trip would be the SEVERAL times that people told us “skip La Ventana if you’re not kite surfing, but make sure to stop in Los Barriles, it’s amazing”. Not having visited Los Barriles before, we were encouraged to set aside several days for this seaside resort town, but decided within a few hours of arriving that those recommendations had actually been pretty misguided based on our interests.

We didn’t enjoy the intensely American atmosphere of Los Barriles, didn’t find the beaches anything special, and all the food and shops felt terribly overpriced— catering to the huge gringo population.

It was quite a contrast to La Ventana, which feels a bit rougher but decidedly more authentic, as well as hosting a very different type of traveller (vs the wealthy Americans who come to Los Barriles to stay in a resort, ride ATVs through the desert, and basically escape being in Mexico by eating burgers at sports bars).

We had a great Mexican-Japanese fusion sushi dinner at Sushito and wandered through town for a few hours, but eventually decided that we’d leave in the morning and continue south to the national park early.

Before stopping in Los Barriles, we’d actually spent a day in Ensenada de Muertos (another spot recommended to us by fellow travellers, but far more ‘our speed’).

A hidden gem between La Ventana & Los Barriles, the so-named Cove of Death hosts an incredible variety of marine life straight out along the sea wall in front of Restaurant 1535, who actually let us camp for free right in their oceanfront parking lot!

A local tour guide even captured some amazing drone footage of us in our kayak, out for a morning paddle in the bay, and was kind enough to share these incredible aerial photos. What a reef!

We particularly loved the hundreds of puffer fish who swam right up to our masks, but also the eels and rays and thousands of other colourful fish on display. Up until visiting Cabo Pulmo, this was far and away the best snorkelling we’d done in Baja— but it was about to be usurped!

From Los Barriles, it was a fairly easy drive south to our next destination, Cabo Pulmo National Park. Although the last 30min of the drive was on a washboard dirt road, we managed just fine in our 2WD van and arrived to this protected area on the East Cape with bubbling excitement.

Home to Baja’s largest living coral reef (and the only reef on the west coast of North America!), Cabo Pulmo National Park is a place of unbelievable magic— one whose underwater world hosts large schools of colourful fish, 14 species of shark, humpback whales, sea turtles, and giant stingrays, just to name a few. Of the 14 species of hard coral, 11 live in Cabo Pulmo, supporting a kaleidoscope of marine life and protecting the coast from otherwise damaging hurricanes.

Its history is equally inspiring: several decades ago in what was, at the time, just a small fishing village on the East Cape, locals collectively banned fishing and set to work on what would become the most successful marine restoration project of all time.

The area received national park status in 1995, a decade later was recognised as a UNESCO World Heritage Site, and now, less than 30 years after its initial protection, the biomass of Cabo Pulmo has increased by more than 400% due to local conservation efforts. If you needed proof that humans have as much power to heal as we do to destroy, this is perhaps the most striking example!

We’d specifically juggled our itinerary to spend Christmas camped on the beach here in Cabo Pulmo, where the holiday restaurant and tourism closures were least likely to affect our plans.

That decision turned out to be fantastic and I couldn’t have imagined a better way to celebrate Navidad than with 6 days of snorkelling and kayaking through one of the most spectacular marine environments I’ve ever seen (and this is coming from someone who’s dived all multiple times in the Galapagos, the Great Barrier Reef, and Thailand!).

Cabo Pulmo is one of those rare places where you can see just about everything with your own mask and snorkel, no need to sign up for a tour, so we ventured into the water every day with our gear in search of colourful underwater life.

And each time, we were blown away by some new discovery, whether it was a fever of stingrays floating gracefully above the sand, a massive school of silvery tuna, sea turtles nibbling at the coral, or an enormous feeding frenzy with dozens of different fish.

We shifted between 2 campsites during our time in Cabo Pulmo, the rocky shores of what was once a beachfront RV park (now abandoned and totally free; 1st picture) and the sandy beach of Los Frailes (2nd picture), incredibly popular with long-term travellers and snow birds— many of whom park their RVs here for 5 months of the year, enjoying weekly food delivery, trash pick-up & even water from a nearby well.

We enjoyed both, but particularly the rock beach that granted fantastic access for kayaking.

Indeed, one of our favourite activities in Cabo Pulmo was taking our inflatable kayak out every morning to look for humpback whales, who swim right through the bay and sometimes amazingly close to the shore from sunrise until ~9am.

Respecting their space is important, but we had a mother and baby get within a few metres of our kayak just by chance— they played for about 10min in front of us before some tourist boats came blazing in and scared them away. And yet, moments later, we witnessed half a dozen mobula ray hurling themselves 5m out of the water.

There aren’t adequate words to describe how incredible Cabo Pulmo is, but suffice to say that it was (and probably will remain) the highlight of our time in Baja.

This post includes a couple days into the following week, keeping all of our time in Cabo Pulmo National Park together in one spot!