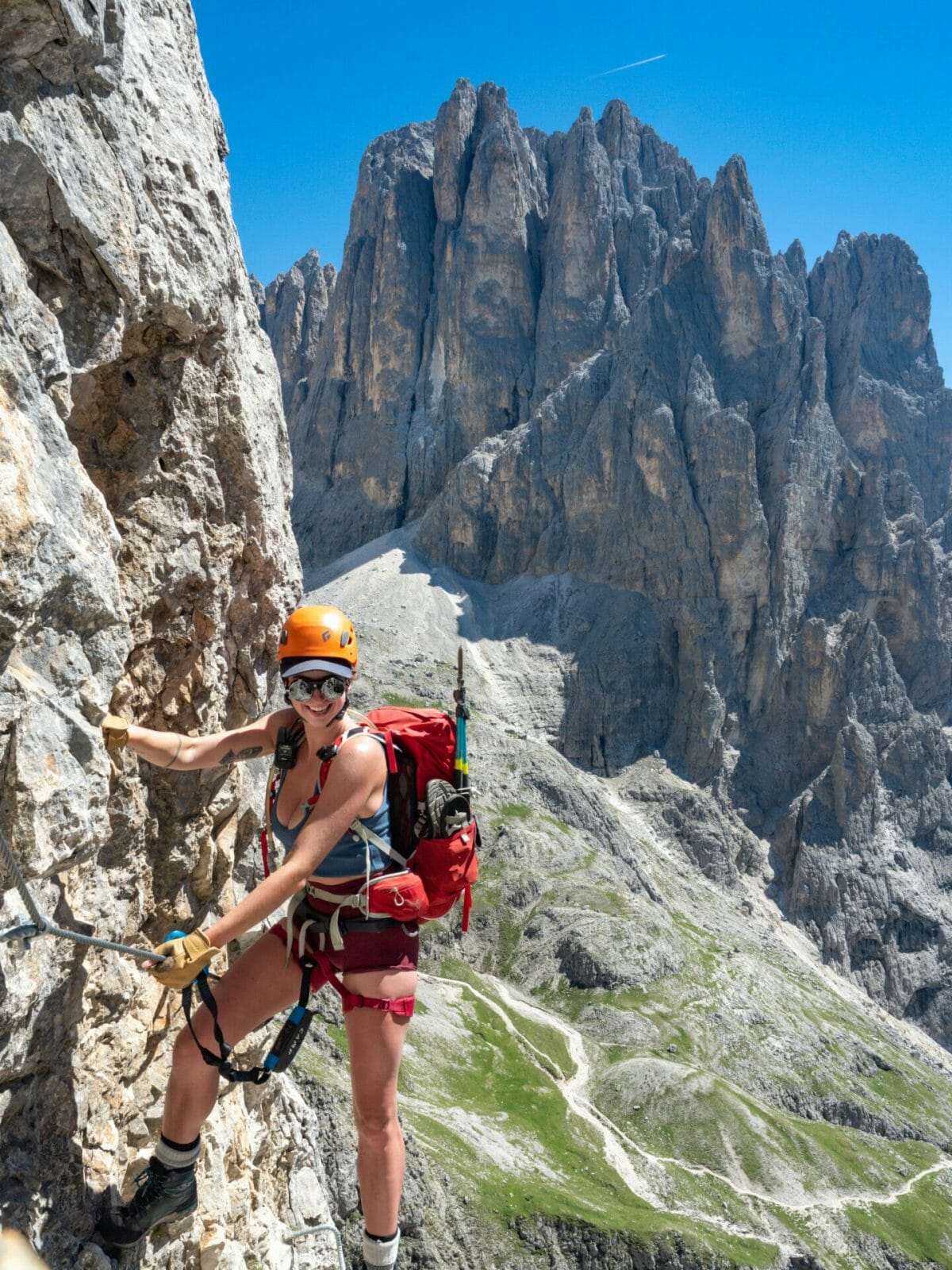 Today is an interesting contrast, with truly spectacular views from both the trail and via ferrata routes in the morning, followed by an absolutely miserable 1,300m descent that will traumatise even keen hikers.

Enjoy the highs and power through the lows— by all accounts, it’s a memorable section of AV2!

This comprehensive guide to Day 10 of Alta Via 2 contains detailed section times, route recommendations, adventurous side trips, via ferrata, and heaps of insider tips— use it to plan your hike & then refer back on the trail so you always know what to expect!

From Rifugio Pradidali, climb about 5min to the signed junction that you passed yesterday and then begin a 15min downhill approach through loose scree. This will eventually bring you across to the opposite side of the gully, where you can see cables and stemples leading up the vertical rock and out of sight.

The route officially begins just above a painted red star— hop on the cable and start climbing!

This is the absolute best part of Via Ferrata Porton, with a long line of uninterrupted vertical climbing, spectacular views of Cima Canali, and beautiful morning sun. I was also delighted to have the entire route to myself, as this is one of the less busy via ferrata along AV2!

Spend just under 1hr on Via Ferrata Porton: about 45min of excellent climbing with the occasional horizontal traverse and then 5-10min down-climbing into a dirty gully.

Once off the cable, follow red markers up the right side of the gully until you’re approximately halfway to the Forcella and then shift left— keep your eyes peeled for the markers, because they can be easy to miss and it’s an absolute nightmare trying to cross the gully at a higher point!

A short section of cable assists the crossing (see left photo above) and then the final climb out of the gully offers a ladder and some cables to Forcella Porton. In total, it takes about 20min to ascend the gully; great care should be taken in navigating the loose scree/talus, particularly if other climbers are below.

Connecting the Via Ferrata: Forcella Porton to Forcella Stephan (1.5hrs)

From Forcella Porton at 2,460m, drop a few metres to connect with path 714 on the right side (Via Ferrata Velo takes off on the left, so make sure to stick right) and then ascend  for about 30min to reach Forcella delle Fede. I highly recommend getting your poles back out at Forcella Porton, you’ll want them for the next 1.5hrs!

Off the other side of the pass, drop for only a few moments to reach a short cable section on the right side of the rock. Continue descending on trail, drop down a steep cable, and then follow another path across the large gully, clipping on and off intermittent cables. Allow about 45min to reach Forcellla Stephen.

From Forcella Stephen, you can tuck in a quick summit by hiking leftwards up the well-formed rocky trail to Cima di Val di Roda, which won’t take more than 10-15min.

Back at Forcella Stephen, connect to Via Ferrata Gusella for the steep descent (the cables are to your left as you return from the summit, plummeting right off the ridge and down towards the rocky gully below).

Descend on cable and occasional rungs for about 40min before dropping onto a steep, rocky path that will bring you back to Passo di Ball and the signed junction in about 20min. From here, it’s a further 5min to Rifugio Pradidali for about 1hr of total descent time.

Back at Rifugio Pradidali, the route leads behind the hut and through the rocks, climbing towards a pass that seems always just out of sight. The trail is rough, rocky, and after a long day of via ferrata (much of which was spent ascending and descending gullies) somewhat unending.

Be sure to keep a close eye on the GPS here, as a second set of markers lead straight back all the way to a different high pass, when the route to Passo della Lede actually curves right for the final ascent— I had to backtrack about 10min, but my friend walked a full hour over the wrong pass before realising the error and it would be very easy to do!

What follows the tricky ascent of Passo della Lede is far worse: more than 2.5hrs of relentless downhill on a rocky, uneven trail. If you have issues with your knees, just know that this will be the worst section of AV2 for you and the best thing to do is just power through (but at a reasonable pace, since I know several people who managed bad falls).

After about 1hr of steep descent, arrive at Bivacco Minazio, which is just over a third of the way downhill. Although the worst of the scree is past, the trail doesn’t really let up from here.

Since I did this descent after hiking from Rifugio Rosetta AND both via ferrata described above, I thought I might cry when I looked across the valley and saw Rifugio Treviso perched impossibly far away on the opposite hillside. Even as the descent continued through the forest, the hut seemed always too far away to reach!

But somehow, you will eventually come to the river, and from here it’s an easy 20min ascent to Rifugio Treviso. The torture is over!

Thankfully, what awaits at the end of this brutal descent is one of the best huts on AV2! Rifugio Treviso is surrounded by dark pine trees, providing a very unexpected change of scenery from all the bright limestone of previous nights, and the atmosphere is instantly homey. The food is delicious, the staff are so friendly, and I slept like a rock in the comfortable rooms. Reserve Rifugio Treviso by email.

If you fancy a late start the following day, I also highly recommend their hot sausage, grilled cheese, and onion sandwich with spicy veg sauce— hands down the best sandwich I’ve had in the Dolomites!