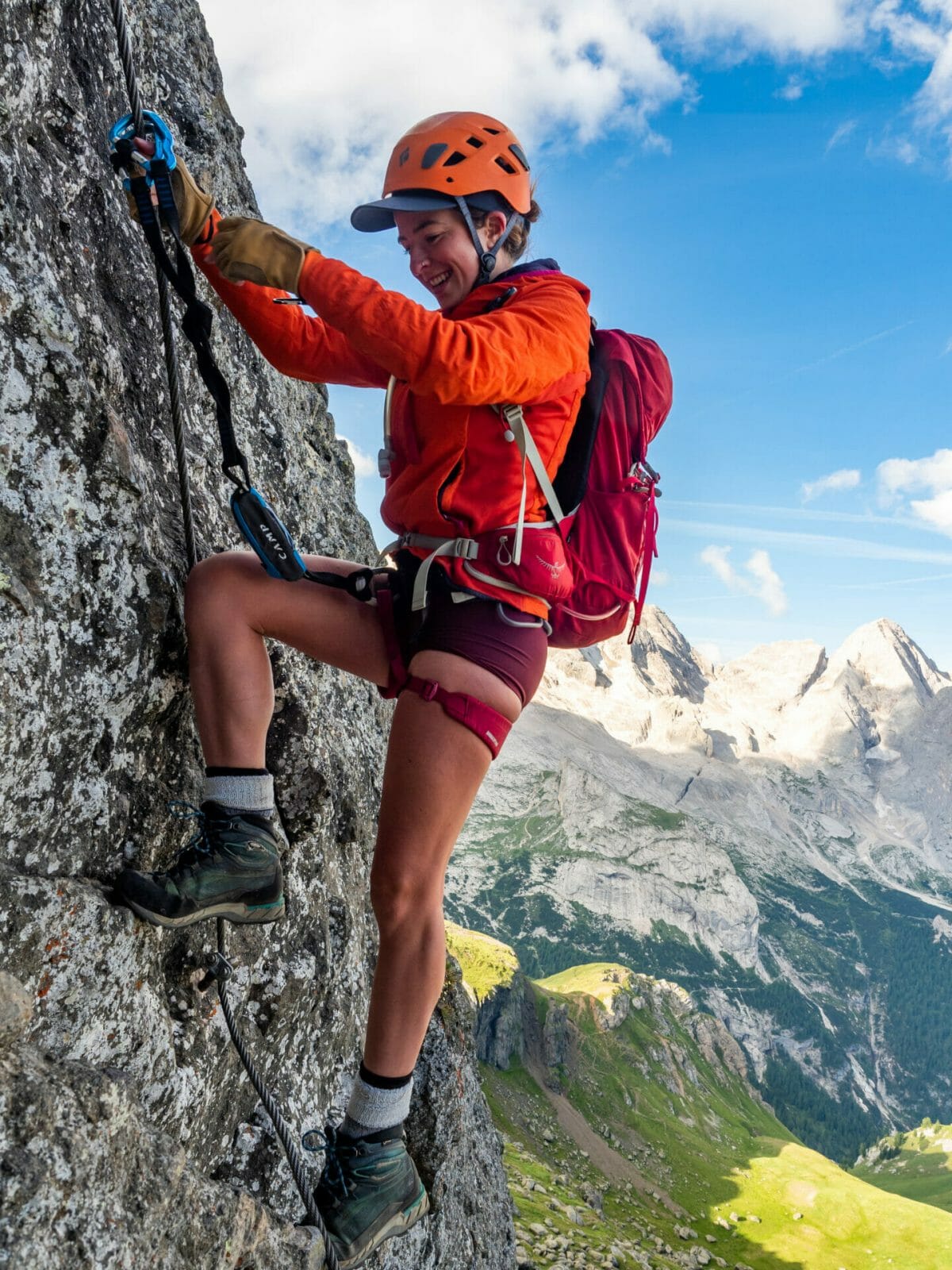 Today’s recommended route features a wonderful via ferrata just out the door of Rifugio Castiglioni Marmolada and an onward journey to Passo San Pellegrino, more or less the halfway point of AV2!

As discussed in my post for Day 5, there are several variations available that might influence how you use this post. Most importantly, if you are not climbing Marmolada (or you don’t wish to take a rest day), then you’ll be a day ahead of the itinerary as I’ve written it here and this will be your day 6.

As for today, those climbing Via Ferrata della Trincee will likely not have enough time to complete the standard AV2 route from Lago di Fedaia to Passo San Pellegrino entirely on foot, so it is recommended to cut at least part of the journey down by catching a bus or taxi from Penia. With that in mind, here’s what you need to know!

This comprehensive guide to Day 7 of Alta Via 2 contains detailed section times, route recommendations, adventurous side trips, via ferrata, and heaps of insider tips— use it to plan your hike & then refer back on the trail so you always know what to expect!

From Rifugio Castiglioni Marmolada, cross the road and ascend steeply for about 45min to reach the cable car station and nearby Rifugio Luigi Gorza. This is a great place to gear up for the via ferrata, which is reached in a further 10min.

The cables begin on the left side of the rock under a blank white sign, climbing up the wall with a challenging but very fun series of moves. This is the hardest part of Trincee, so if you can make it up this, the rest of the day will pose no issue!

Allow a little over an hour to work your way through first cable, which ascends and circles several of the rock spires high over Lago di Fedaia with the perfect backdrop of Marmolada.

After the first lengthy stretch of cable, drop onto a little pass before connecting to the next cable, which will bring you around the south side of the mountain for about 30min.

The next half hour is spent on intermittent cable, interrupted regularly by easy scrambling across the grippy volcanic rock.

Shortly after passing a cave, you’ll travel through the first tunnel of the day, an incredible living relic from the First World War. Keep your headlamp handy as you wander through the dark underground spaces.

The second tunnel is reached after a short section of cable and is an absolutely enormous network of corridors, stairs, rooms, and little windows looking out onto Marmolada and the surrounding mountains. Allow at least 10min to wander through the tunnel end-to-end, keeping a close eye on the reflective red signs that denote your path onwards.

Unlike the first tunnel, it would be all too easy to lose yourself in the maze of paths that exist within this incredible cave system, and when you finally pop out the other side into daylight, you’ll have a new appreciation for what it may have been like for the soldiers who spent days hidden in these tunnels. In just a few steps, arrive at Bivvaco Bontadini.

From the Bivouac, climb for about 10min up the hillside to arrive at a little side summit— marked, as always, with a cross. The view is sprawling and an easy addition to the day!

Back at the bivouac, descend a steep but manageable trail towards Rifugio Padon and then continue around the right side of the mountain, gradually losing elevation as you return towards Lago di Fedaia.

The path eventually fades into a series of goat tracks and you’ll no sooner have found what appears to be a well-trodden trail than arrive at a dead-end in a steep hillside of grass. Just keep making your way across and down, generally following the GPS track to finally connect with a discernible route above Rifugio Castiglioni Marmolada. Common-sense route-finding is essential here.

Just below Rifugio Castiglioni Marmolada, a steep trail descends through the forest and occasionally along the creekside for several kilometres to reach the nearby town of Penia. This is a beautiful walk, and although it does cross the road about 3 times, you’re largely in the trees and even shaded on the descent.

Penia is a fairly small town, but only 2km down the road, Canazei is a bustling holiday destination— this is a great place to pop into a pharmacy or pick up any last minute supplies, as you won’t really find another town of this size on the second half of AV2 (I couldn’t even buy cold medicine in any of the tiny passes we hiked through, so stock up here as needed!). It’s an easy walk along a footpath to Canazei (photo below).

If you opted not to do Via Ferrata delle Trincee today, you’ll certainly have time to hike onwards from Penia to Passo San Pellegrino via Rifugio Contrin (this route saves a considerable amount of road walking compared to the route via Malga Ciapella)— allow 6hrs+ for the long but manageable journey.

If you did tackle the morning excursion on Via Ferrata della Trincee, I’d recommend catching a bus from Penia to San Pellegrino (bus fare ~1.5€). A third option would be staying in Rifugio Contrin to break up the walk, which you could finish on the morning of day 8.

This is a rare night on AV2, in that you’ll have your pick of several hotels right along the route. Passo San Pellegrino isn’t much more than a couple cafes and a handful of hotels (don’t expect to find any supplies here), but you certainly will have a a private room, a sparkling bathroom, and access to a sauna in any of the available hotels. Expect to pay more than you’ve been paying at the rifugi, but for one night, it’s a treat indeed!

I stayed at Hotel Costabella, which had a scorching sauna, a bathtub in the room, and a spectacular dinner that I felt sorely underdressed for. Reserve Hotel Costabella online.

Paragliding from Planpraz in Chamonix-Mont-Blanc